How much of the current Warriors’ team will be around next season?

How much of the current Warriors’ team will be around next season? 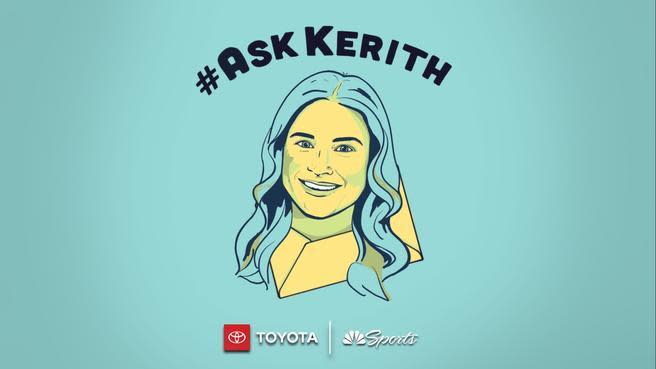 Editor’s note: Kerith Burke, NBC Sports Bay Area’s Warriors reporter, will take you inside the Dubs as only she can each Friday with the Ask Kerith Mailbag. Send her a question on Twitter or Instagram using the hashtag #askKerith.

@mefixcomputers #AskKerith any chance the last game of the season plays out with Klay, Steph, Dray, Wiggins and Looney all playing, and giving us a preview of our veteran core for next season’s return to contention?

The Warriors announced last night Klay is out for the season. Here’s the full statement:

This news makes the feeling official. It was a long shot Klay was going to play at all this season. Steve Kerr said it’s possible Klay plays in the 2020 Summer Olympics in Tokyo. Klay tore his ACL in June 2019. The Olympics begin in July. A year for an ACL recovery falls into the typical range.

It’s looking more apparent that Steph will play in early March based on what he’s doing in practice.

Via IG, @drewatt wonders: Is it really a good idea to let Steph play this season? With Klay being done of the year it would seem the best idea would be shutting down Draymond and letting Steph heal the rest of the season. Has the team given any thought to this?

When Steph is ready to play, he’ll play. Getting him back on the court once he’s cleared is a head start to build chemistry for next season.

There’s a mental side to this, of course. Steph got to rest while he rehabbed his hand. That’s good! Rehab is also boring and it takes a player away from their routine. Competitors want to play, and time in the NBA is not infinite.

The sooner he can re-enter his life as the face of the Warriors, the better it will be for him, his teammates, the coaches, the fans, Chase Center and TV ratings. It’s remarkable what rides on him.

I know people want to package Klay’s injury with Steph’s, but the injuries are different. And while it’s true Draymond could use some rest, shutting down all of them would put the team in a tailspin. Who would lead? What would the product on the floor look like? Would they have enough bodies if other injuries pop up? Would this be tantamount to tanking?

These hypotheticals are unnecessary. If the medical staff determines Steph can play, there’s no reason to hold him out. Steph gets a voice, too. He wants to play.

@K_Weavs_ How do you think the emergence of Marquese Chriss will affect how the Warriors draft this summer? #askKerith

Via IG, @goldenstatewarriorsreign asks: With Quese showing out, will the Dubs focus on him for the future of the center position or will they get someone to start over him? Kevon, or James Wiseman if picked?

Marquese looks like a gem. He’s athletic, and the magic words lately are “vertical spacing.” He catches lobs and dunks the ball off the planet.

The Warriors converted his two-way contract into a two-year deal, so he has more security than he started with. He’s part of the plan, and he has risen to the task of being the starting center. Kevon Looney’s role is off the bench.

Kerr said the Warriors will look to draft a center this summer, but I don’t know if that means they’re all-in on James Wiseman. He’ll be 19 when the draft rolls around. The Warriors care about developing players, but they’ll have to determine if they need the draft pick to play ASAP. If they use their first-round pick on a center, Chriss gives them a cushion year to figure it out.

Wiseman’s college experience was three games at Memphis. This season, Kerr has discussed the amount of learning young guys have to go through to make it in the NBA. I hope Wiseman has good teachers around him now.

One of the reasons Eric Paschall has acclimated well to the NBA is the four years he spent at Villanova. I am 100 percent in favor of adults making their own decisions and for graduating high schoolers to bypass college and enter the NBA if they wish. I also think that’s going to be exceptionally tough. Not everyone is LeBron.

@stagedarren BOOGIE! What’s his contract status for next season? If available, would love to bring him back for a MLE. Would the Warriors have any interest? #AskKerith

I like fans’ enthusiasm for bringing back former players, but I don’t see a reunion for DeMarcus Cousins and the Dubs. Both parties moved on when Boogie signed a one-year deal with the Lakers.

It might be too risky, as well. Boogie rehabbed a left Achilles tear and a torn left quad with the Warriors. Then in a summer workout, he tore his left ACL. This collection of injuries will make teams skittish.

@irenealcachupas #askKerith do you think the Warriors can make it to the playoffs?

No, not this season.

@boo161 #askKerith do the Warriors plan on keeping the team they have built going into next season?

I think so. This whole season has been about development and experience. Jordan Poole, Eric Paschall, Marquese Chriss and Ky Bowman are getting valuable minutes. Alen Smailagic has shown progress. Damion Lee is older, but playing time is good for him, too.

Alongside Steph, Klay and Draymond, Andrew Wiggins is an intriguing player with plenty of upside. I think Wiggins is a long-term piece.

@toogr8fltm Will someone provide the Dubs’ draft picks over the next 3 years? It’s pretty confusing.

This should help. Click that link for a look at the Warriors’ 13 draft picks through 2026.

This week’s high five goes to Juan Toscano-Anderson for holding a basketball clinic in Monterrey, Mexico during the All-Star Break.

I had a long talk with Juan about his time in Mexico and what it means to him to be one of the few Latino faces in the NBA. He has a vision for his future that details giving back plenty to a community that supported him. Look for that story coming soon.

How much of the current Warriors’ team will be around next season? originally appeared on NBC Sports Bay Area