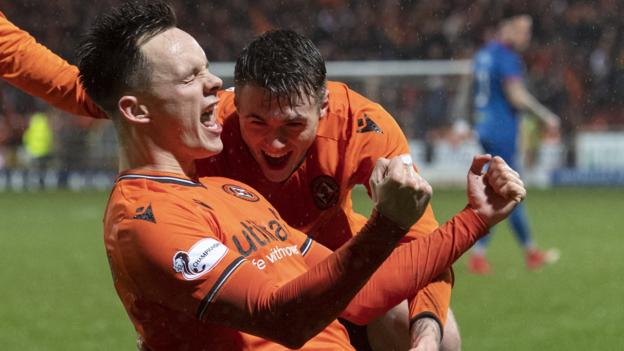 Louis Appere swept the hosts ahead, but Jordan White levelled on 32 minutes. However, Lawrence Shankland scored a sumptuous winner, his 28th goal of the season, to earn United a first win in six games.

United now need 13 points from their final 11 games to end a four-season absence from the top-flight.

Perhaps due to the cavernous gap to the rest, United have struggled in recent weeks in their quest to get over the line as quickly as possible, having failed to win their previous three league matches.

But they had put seven goals in two games past Inverness already this season despite the Highland side’s place in the table giving them the status of nearest challengers.

That theme looked set to continue at Tannadice as the hosts started strongly, Appere finishing superbly past Mark Ridgers after Rakish Bingham cut the ball back to the edge of the box.

But Inverness responded well to go in level at the break, as White showed good determination in diving to head home from a corner, then flashed an effort just wide moments later.

The visitors continued their dominance after the restart as they demonstrated their play-off credentials, but as has so often been the case this season Shankland’s laser finishing rescued Dundee United.

The Scotland striker did brilliantly to stop a cross dead in the slippery conditions, and with a flash of his feet deceived two defenders before firing into the bottom corner.

It was classy from start to finish from the Scotland striker, who will continue to court interest having now scored 28 times in 30 club appearances this term.

Inverness had half an hour to find a response, and Carl Tremarco’s late volley into the side-netting came close, but in sodden conditions United held on with relative comfort to assert their dominance.

If the moment had not already arrived, this win surely means it is not a matter of if, but when, they seal a return to the Premiership.