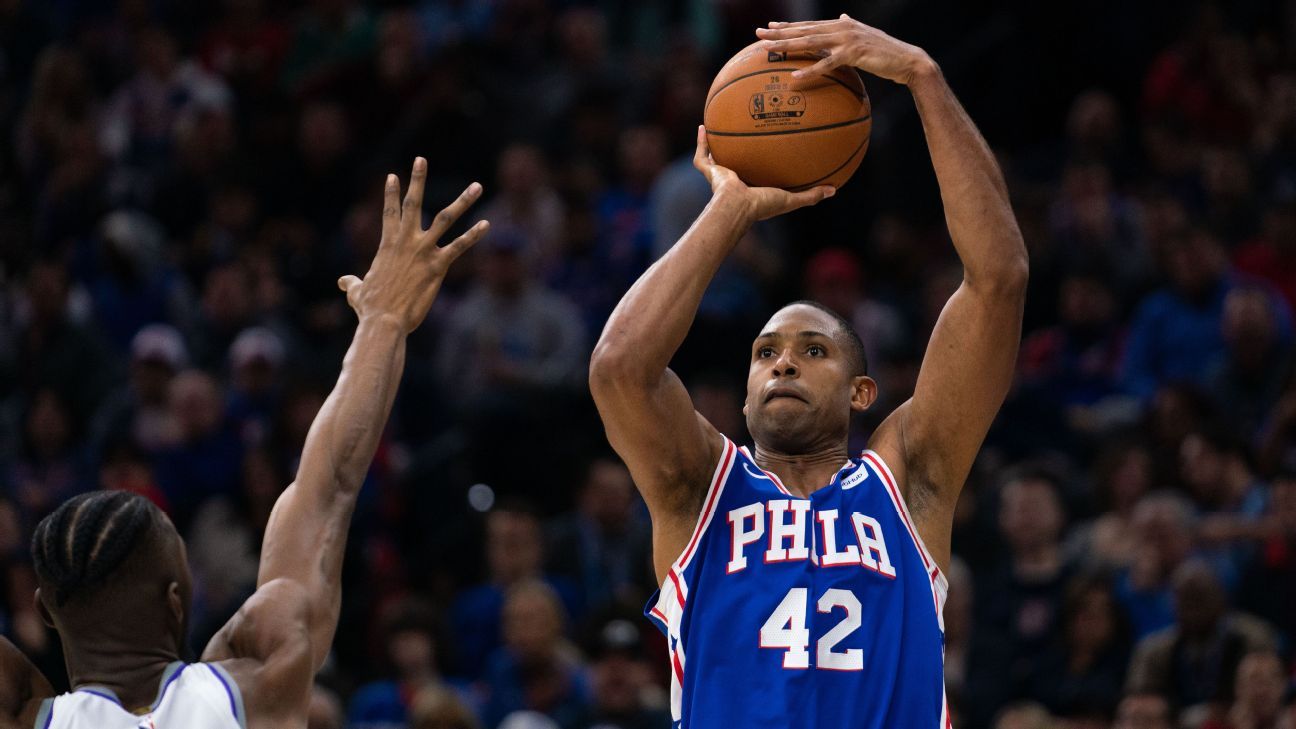 CAMDEN, N.J. — In the wake of benching Al Horford in the final game before the All-Star break and playing him just 18 ineffective minutes in Thursday night’s overtime victory over the Brooklyn Nets, Philadelphia 76ers coach Brett Brown declared Friday afternoon that he still has faith in the four-time All-Star big man, saying, “I want to help him help us.”

“There’s a human side of this I take a lot of pride in, and figuring that side out as best as I can,” Brown said after a brief film session at the team’s practice facility ahead of Saturday night’s showdown in Milwaukee against the league-leading Bucks on ABC. “Relationships and communication rule our sort of world in many jobs, and certainly does in mine.

Horford was not one of the players made available to the media Friday afternoon by the Sixers.

When Philadelphia signed Horford away from the Boston Celtics this summer as a free agent, bestowing upon him a four-year deal worth $100 million, the hope was that he could both buoy the team when Joel Embiid went to the bench and also play alongside him for significant stretches. The first part of that — despite the noise that has followed Horford all season — has actually worked out rather well. Philadelphia is outscoring teams by three points per 100 possessions when Horford is on the court, and the Sixers are actually slightly outscoring teams when Embiid is out of the game this season — after they were famously outscored by 12 points in the three minutes Embiid sat in a two-point Game 7 loss in Toronto in the Eastern Conference semifinals.

But playing alongside Embiid? That has been a disaster. The combination has been outscored by 2.1 points per 100 possessions in 487 minutes together this season. The 98.7 offensive rating the Sixers have when the two of them are on the court together is more than five points worse than the Golden State Warriors‘ league-worst 103.9 rating this season.

Thursday night’s game, however, may have been the low point of Horford’s tenure in Philadelphia. While he was removed from the starting lineup for the first time since early in his rookie year in the final game before the break against the LA Clippers, he played well and the Sixers beat one of the league’s best teams. Thursday night against the Nets, however, he struggled mightily, as Philadelphia was outscored by 30 points in his 10 first-half minutes and by 26 points in the 19 minutes Horford played in the game. He was booed repeatedly when he missed shots — and not for the first time this season, either.

Meanwhile, he played just a little over two minutes in the middle of the fourth quarter in relief of Embiid and sat out the overtime period completely. Brown attempted to downplay those struggles, chalking them up to the Sixers going up against a Brooklyn team that was playing extremely small. He added that the Sixers still expect Horford to be a significant part of their postseason plans.

“We have seen the history of Al Horford, and all of us would be very naive to think some of his signing wasn’t driven to where we want to be in April, May and, we hope, June, Brown said. “Just progress out … look ahead to see the matchups.”

One of the matchups that Philadelphia specifically targeted in signing Horford was Milwaukee, which features Giannis Antetokounmpo at power forward and the combination of Brook and Robin Lopez at center. After Thursday’s struggles, the Sixers will be hoping for a bounce-back performance from Horford — and a win on the road, something that Philadelphia, which is 9-19 away from home this season, has struggled to accomplish.

But even if Horford plays well in that game, the questions will continue about Horford’s fit. After spending the past decade serving as one of the NBA’s most versatile big men, he told ESPN last month that the adjustment to playing alongside Embiid and adjusting to downsized opportunities when they share the floor — specifically being used as a spot-up shooter to try to give Embiid more room to operate in the post — has been a difficult one.

It is also why Horford has looked much more like his prior self with the Celtics and Atlanta Hawks when he has been paired with Ben Simmons in the minutes while spelling Embiid at center.

“Yeah, I mean, it is definitely different for me,” Horford told ESPN. “It’s almost like me continuing to reinvent myself, and trying to figure out other ways that I can be effective.”

Horford’s struggles led to calls in Philadelphia for him to be replaced in the starting lineup long before Brown actually did it last week. And, after doing so, Brown indicated that Horford won’t be returning to the starting five anytime soon. But when he was asked if he has talked to Horford about what his future in Philadelphia will look like — given that the 34-year-old is in the first year of an expensive four-year contract — Brown dismissed the question out of hand.

“No,” he said. “And how foolish would that be, to talk about what’s going to happy in three years. Like, it’s not even close to being on my mind. I’m living in now. I’m very candid, very honest with the way that I see it, the way I just said, and he’s been great.”

Brown also tried to point back to his time in San Antonio and the way his old boss, Gregg Popovich, coaxed a young Manu Ginobili to agree to come off the bench for the betterment of the team.

There is a stark difference between the way Ginobili was used and the way Horford has been, however: Ginobili was always going to be on the court in the final moments when the game was on the line.

As Thursday night showed, Horford’s role in such moments is far from assured. And, judging by how things have gone this season, it’s hard to see many instances where it will be going forward.

“As I remind everybody, we brought Ginobili off the bench for many years,” Brown said. “That’s my most personal example that I can share with him. And that wasn’t smooth at the start, and there is pride involved. But you end up where you end up, and I think his human nature of being selfless, and a tremendous persona and teammate, is filtered into that competitive spirit and that pride. And so far, I feel like he’s in an OK place.

“[Thursday night] wasn’t a great night. But that’s an outlier, in so many ways, to me.”