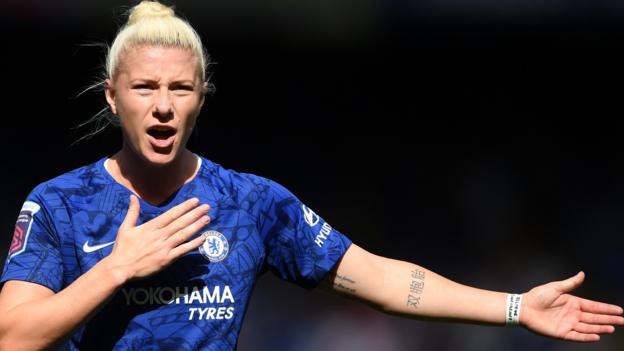 The 25-year-old, who earned the first of her five England caps after last summer’s World Cup, took her goal tally to 13 for the season by scoring in Wednesday’s win against Birmingham.

Hayes intends to “push” to have “every Chelsea player” in Neville’s squad.

“As far as I’m concerned there are not enough in the England side,” she said.

“My job will be to remind him that we’re unbeaten so all my players deserve to start.”

England, just one goal behind Arsenal’s Dutch striker Vivianne Miedema in the Women’s Super League’s scoring chart after 14 games, has been instrumental in helping establish Hayes’ side in the division’s top two.

The Chelsea striker is the most prolific England player in the WSL, netting four more than once-capped Everton forward Chloe Kelly and eight more than Manchester City’s Ellen White – although the Lionesses’ top scorer at last summer’s World Cup has had her campaign interrupted by injuries.

Asked if England should start in the SheBelieves Cup for the defending champions in the United States, Hayes said: “Oh, she’s marvellous. She’s the best English number nine in the country.”

Neville will name his squad for the prestigious invitational four-team tournament, which includes hosts USA, Spain and Japan, on Tuesday.

Chelsea’s only match before then is a Women’s FA Cup tie with Liverpool on Sunday, after which the Londoners could go top of the WSL table if they beat leaders Manchester City on Sunday, 23 February.