Portland’s struggles do not have Damian Lillard pushing for trade, “I can weather the storm”

Portland’s struggles do not have Damian Lillard pushing for trade, “I can weather the storm” 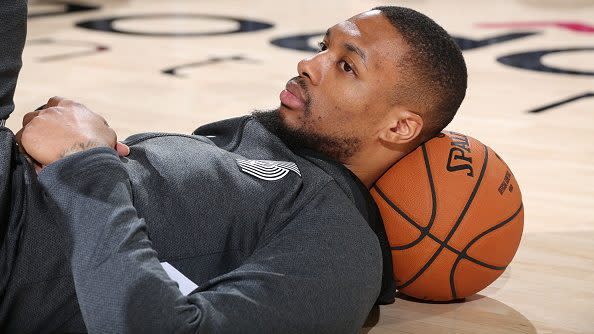 The Trail Blazers are 19-27, sitting as the unexpected 11 seed in the West, and there calls from some quarters of the Pacific Northwest for Portland to do something drastic to try and salvage the season. Too often, those calls are followed by “what if Lillard decides this isn’t working and pushes for a trade?”

It’s not going down that way. Not according to Lillard.

In a league where it’s become commonplace for superstars to use their leverage — either to get traded or to force the team to make bold moves they want — Lillard remains loyal and trusts the front office in Portland. He realizes what this season has become for the Trail Blazers and he wants the franchise to think about next season, not desperation moves to save this one. Here is what he told Jason Quick of The Athletic.

“That don’t have nothing to do with my commitment to the team,” Lillard said. “I mean, it’s not like we are going to do something that is going to take us to the championship at this point. I think it’s more important for us to protect the assets we have, the guys who are going to be here and who are going to help us going forward. I don’t think it makes sense to sacrifice that just to make a desperate play.

“It’s been a tough season, but the season is not over. We can make something of this season as we are, but it’s not worth, you know, saying ‘OK, let’s force something and go do something that at the end of the day doesn’t make sense.’ But that has nothing to do with my commitment. I said it after last game (Golden State): I feel like I can find a way. I can weather the storm. I can go through hard times.”

He also has made clear he isn’t going to push GM Neil Olshay to make specific trades.

Lillard is averaging 28.3 points and 7.6 assists per game, he scored 108 points in his last two games, and he’s playing at an All-NBA level again. He remains one of the game’s top guards and a player the Trail Blazers can build a contender around. His five-year max contract extension doesn’t kick in until next season.

Portland’s challenge is this: Lillard is 29 and in his prime. If they are going to win a title with him that has to happen sooner rather than later. Portland should not make desperation moves to salvage this season — getting Jusuf Nurkic back in the next few weeks could turn things around without a trade — but even looking ahead: If they are fully healthy next season are they on the level of the Lakers or Clippers? To my eyes, no. Then the question becomes what needs to be done to get there? If it’s time for something bold, should they test the trade market for CJ McCollum?

The Trail Blazers have some big questions to answer after this season.

The thing they don’t need to worry about is Lillard.