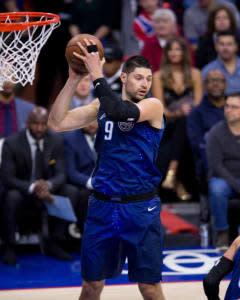 Booker is the most expensive guard on the slate, but that won’t stop me from rostering him. He’s averaging 45.3 fantasy points over the past 10 games, and he’s about five fantasy points better on the road than at home. The absence of Kelly Oubre (concussion) could also funnel the ball into Booker’s hands more often. With Oubre off the court this season, Booker averages 1.1 more assists and 1.2 more shot attempts per 36 minutes. The Knicks obviously aren’t good, either, giving up 113.2 points per game (11th most). New York also allows opponents to shoot 38.9 percent from distance — the highest mark in the NBA.

Clarkson is an affordable option with some upside against a poor defensive team. Since joining Utah, he’s averaging 21.3 fantasy points per game and hasn’t played fewer than 21 minutes in any contest. He’s also racked up four games with more than 27 fantasy points over the past 10. Clarkson isn’t afraid to launch up shots, and that’s a good match considering the Pelicans allow the second most points per contest (116.9) and the sixth-highest three-point percentage (36.8).

Russell is the clear focal point of Golden State’s offense, but that’s an offense that could be stunted going up against Denver. The Nuggets allow the third-fewest points per game (104.9) to opponents, and that’s fueled by holding teams to 32.6 percent shooting from distance, which is the second-best three-point defense in the NBA. Russell takes about half of his shot attempts from long range, so it could be a tough situation for him Thursday.

Randle has been effective lately, averaging 35.1 fantasy points across his past nine appearances, and he’s not dipped below 31 fantasy points during this stretch. Marcus Morris (neck) is also questionable for this game, and if he’s out, Randle becomes an even better play. With Morris off the court, Randle sees a boost of 4.6 percent usage, which includes 1.7 more shot attempts and 4.2 more free-throw attempts. The Suns’ defense is also ineffective, allowing the seventh-most points per game (114.3).

I’m endorsing Barton for a second straight day. With Paul Millsap, Jamal Murray and Gary Harris all with murky injury statuses, Barton stands to benefit. He’s been good in general, averaging 28.6 fantasy points per game this season, but with those three off the court, he sees a 4.2 percent usage bump, averaging 3.4 more assists and 3.2 more shots per 36 minutes. The Warriors’ defense is also poor at stopping the three, allowing opponents to shoot 37.7 percent from behind the arc, and Barton launches up 4.5 threes per game.

I discussed the Nuggets’ stifling defense in the Guards section, and that applies here as well. But not only do the Nuggets stop opponents from scoring, they’re also good on the boards, allowing the sixth-fewest rebounds per game (43.6) to opposing teams. That serves to hurt Green, who garners much of his value from the glass. He’s also just been a rough play in general lately. Over Green’s past five efforts, he’s averaging only 18.0 fantasy points.

In addition to the Pelicans’ porous defense, they also allow the seventh-most defensive rebounds (36.4) to opponents — an area in which Gobert thrives. Plus, New Orleans allows the fourth-most shots the rim as a percentage of opponent looks, which is where Gobert does all his scoring. With that in mind, he should be able to continue his hot streak. Over the past four games, Gobert is averaging 47.0 fantasy points.

Rostering Lopez is always a risk due to his inconsistent rebounding and reliance on the three-ball. But that makes him a perfect target for tournament formats where upside is king. Despite the Celtics’ solid defense, the Bucks have the highest expected team total on the slate, which only helps Lopez’s case. He has 14 efforts this season with at least 28 fantasy points, and he also averages almost one full three-point attempt more at home compared to on the road.

The Magic are expected to only score 103 points Thursday against the Clippers’ hard-nosed defense. Combine that with Vucevic’s struggles on the road, and $39 is a price I don’t want to touch. He averages about six fewer fantasy points on the road, notably shooting just 37.3 percent from the field.