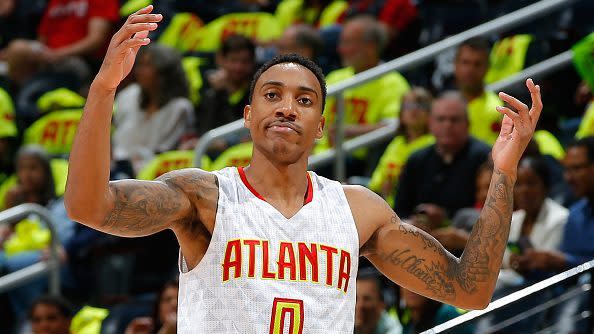 Jeff Teague returns to Atlanta, where he spent his first seven NBA seasons and even became an All-Star. He’ll have a smaller role this time, backing up Young. The Hawks were desperate at back-up point guard, previously relying on Evan Turner playing out of position. Atlanta has been outscored by a whopping -14.1 points per 100 possessions without Young (relative to a -6.2 net rating with Young).

The rationale for Minnesota is less clear.

All three players are on expiring contracts. Teague is better than Allen Crabbe. Though his play has been uneven (generously), 26-year-old Treveon Graham has some potential as a 3-and-D wing, a role always in demand.

The Timberwolves save $1,102,980 in salary the rest of this season. They also open a roster spot that could be useful for a future deal.

Minnesota could use more outside shooting, and that’s Crabbe’s specialty. But he must play well enough to join the rotation for that to matter.

Maybe this is a favor to Teague, who’d clearly run his course in Minnesota. Perhaps, he enjoyed Atlanta and wanted to return (thought he entire team – general manager, coach, players – has changed since he left in 2016). He was already coming off the bench for the Timberwolves.

Ultimately, this isn’t a landscape-changing trade. But it’s nice to see more wheeling and dealing after such a long trade hiatus.