Stephane Peterhansel set the pace in the penultimate stage of the 2020 Dakar Rally, but X-raid Mini stablemate Carlos Sainz retains a healthy lead ahead of the marathon’s finale.

Sainz had to open the road in the 379km timed special within the stage, taking the competition back to Haradh from Shubaytah.

He consequently gave up nearly five minutes to Peterhansel in the first 100 kilometres as he navigated the dunes of the Rub’ Al Khali, but would limit the damage over the rest of the special, ending up eight minutes slower than the stage winner at the finish.

This will still allow Sainz to have 10 minutes in hand for the final 374km Haradh – Qiddiya test on Sunday.

Peterhansel looked set to overtake Toyota driver Nasser Al-Attiyah for second place for much of the stage, but a late charge from the reigning champion saw him come up just 10 seconds short of a stage win. 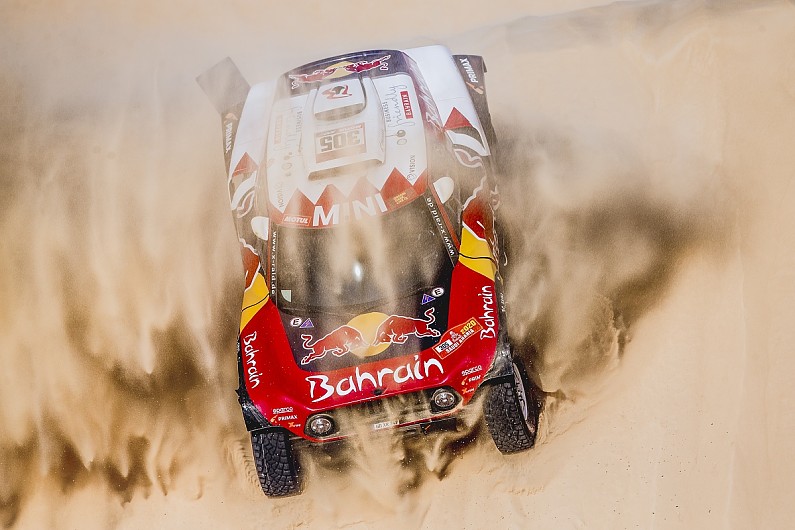 This means that that Al-Attiyah will enter the marathon finale as Sainz’s nearest rival and with a six-second gap to Peterhansel, who will be running ahead on the road.

Local driver Yazeed Al-Rajhi is poised to finish a career-best fourth in his Toyota after a seemingly straightforward stage, whereas his long-time fifth-place counterpart Orlando Terranova has dropped down the order.

Mini driver Terranova was over half an hour off the pace, and has been overtaken by the two Toyotas of Giniel de Villiers and Bernhard ten Brinke in the general classification.

He is now on course to finish seventh ahead of Century buggy driver Mathieu Serradori.

Pierre Lachaume, who entered the day in 10th place in the PH Sport-run privateer Peugeot, crashed out less than 100 kilometres from the end of the stage and exited the rally.

Fernando Alonso was placed 56th in the running order after his roll on Thursday, and is thus yet to complete the stage.

He is not in contention to pick up a maiden stage win, having given up 10 minutes to Al-Attiyah in the early section.