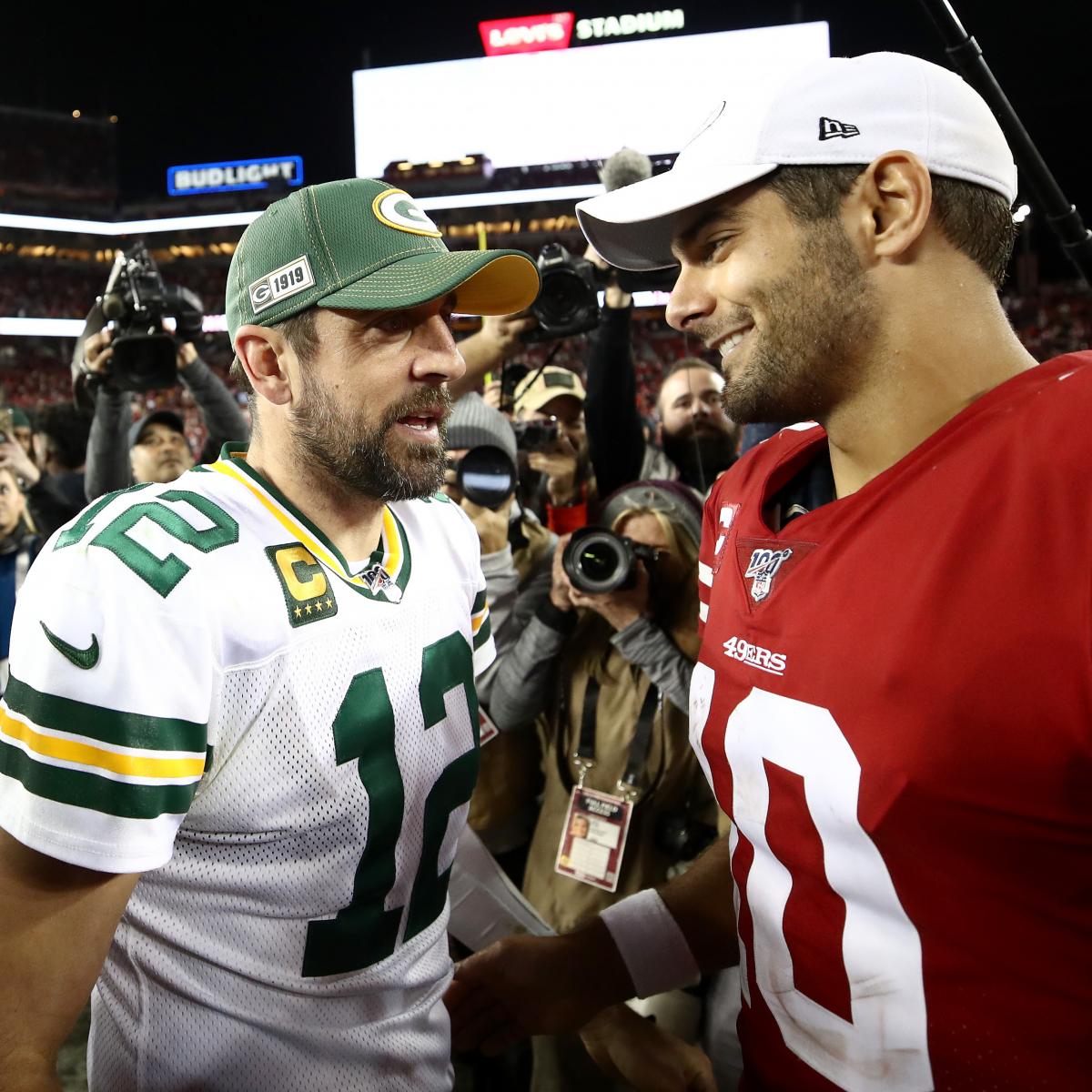 After an upset-heavy Wild Card Round, chalk prevailed in the NFC’s divisional round to set up a potential conference championship for the ages.

The top-seeded San Francisco 49ers face the second-seeded Green Bay Packers with a Super Bowl LIV berth at stake. While the NFL often charms in its predictably unpredictable fashion (looking at you, Tennessee Titans), this should be a dream for all NFL fans.

It’s a repeat of not only San Francisco’s dominant 37-8 Week 12 triumph but also of one of the NFL’s best rivalries of the past three decades.

We can’t wait to see it, and we know you’re all in the same boat. Let’s get down to business, then, with a complete breakdown of the matchup and predictions of how this will go down.

Flush all memories of that lopsided Week 12 battle from your mind. That was about as anemic as Rodgers looked all season (11.8 QBR, second-worst of the year), Aaron Jones could never get going (13 carries for 38 yards) and starting right tackle Bryan Bulaga lasted just nine snaps before an injury knocked him out of the contest.

Green Bay’s potency speaks for itself. This was technically a down year for Rodgers, but he still amassed 4,002 passing yards with 26 touchdowns against a mere four interceptions. This was Jones’ breakout campaign, as he posted multiple career highs, including 1,084 rushing yards and 16 rushing scores. This was another dominant showing for Davante Adams, who packed 83 receptions for 997 yards and five scores into only 12 contests.

Against most teams, the Packers would have a clear advantage.

But the Niners aren’t most teams. Turbo-charged by a defensive line featuring five former first-round picks (headlined by edge-rushers Nick Bosa and Dee Ford), this defense ranked second in yards against, eighth in points allowed and tied for fifth in sacks.

San Francisco’s front can make anyone uncomfortable—yes, even Rodgers—especially when it can bring pressure without bringing extra help. Creating chaos out of a four-man rush is a tried and true method of defensive success, and the Niners supplement that skill with speedy linebackers and a disciplined secondary (especially Richard Sherman) guarding the back end.

Keeping Rodgers upright is a must for Green Bay to survive this game, but that’s a tricky proposition.

With a three-headed monster at running back and an offensive line that can bully the opposition, San Francisco followed its rushing game to a second-place finish in scoring.

The Niners take a hot-hand approach with their running game, and they’re fine feeding any one of Tevin Coleman, Raheem Mostert or Matt Breida. All three cleared the 500-yard mark this season, and they combined for 15 touchdowns on the ground.

Establishing the rush eases the burden on quarterback Jimmy Garoppolo, who encountered both peaks and valleys in his first healthy season as a full-time starter. San Francisco’s signal-caller completed 69.1 percent of his passes for 3,978 yards and 27 touchdowns, but he also threw 13 interceptions (tied for eighth-most).

The Packers play a bend-don’t-break brand of defense, and it’s treated them well. Despite ranking a forgettable 18th in yards against, they were a much more respectable ninth in points allowed.

They’re most disruptive at the point of attack. While they can’t match San Francisco’s quantity of pass-rushers, Green Bay has a quality core of Za’Darius Smith, Preston Smith and Kenny Clark, who combined for 42 tackles for loss and 31.5 sacks. Linebacker Blake Martinez is a tackling machine, and he trailed only Seattle’s Bobby Wagner with 155 takedowns.

The secondary is inconsistent, but obviously it looks much better when the pass-rushers can shrink down the time they spend in coverage. Get to Garoppolo fast enough, and it won’t matter much how the corners and safeties are holding up.

From a statistical standpoint, San Francisco’s electric tight end wasn’t quite as productive as last season. But considering that campaign was a record-breaker, he probably had nowhere to go but down.

It’s not like he fell off a cliff or anything. In fact, he was one of only three tight ends to have both 80-plus catches and 1,000-plus receiving yards.

He’s as critical to this offense as anyone. He can free himself in space and turn decent plays into game-changers with his run-after-catch ability. (Just ask the New Orleans Saints.)

The Packers had no answer for him in the first meeting, when he corralled all six of his targets for 129 yards and a score. On paper, at least, they remain without an obvious counter.

But he did miss Wednesday’s practice with ankle soreness, and while that’s not expected to limit his availability, the Niners need him at his best.

As stated above, don’t worry about this being a repeat thrashing. The Niners know that game has no bearing on this one.

“We know it will be different,” 49ers coach Kyle Shanahan told reporters. “We know that game got away from them early. That’s definitely not the team we’re going to see this week. Everyone knows how good Green Bay is, how good the coaching staff is, how good their players are, how good their quarterback is.”

In the modern NFL, it usually makes sense to take the team with the superior talent at quarterback. This game feels like one of the exceptions, though.

The Niners’ relentless pass rush could get to Rodgers early and often. Even if they aren’t sacking him at will, they can speed up his progressions and force him to throw the ball before he’s ready. Couple that with the fact Sherman effectively eliminates half the field, and Green Bay’s options will be limited (and that’s before accounting for the fact its receivers not named Adams are unproven).

The Packers might also have the best running back in this game, but the 49ers have the more potent rushing attack. Their depth gives them flexibility, and they have elite blockers beyond their offensive line (think: Kittle and fullback Kyle Juszczyk).

Green Bay has advantages here and there, but San Francisco wins the majority of on-paper matchups. Tack on Shanahan’s creativity and a raucous home crowd behind them, and the Niners should have enough to scratch out a close win.