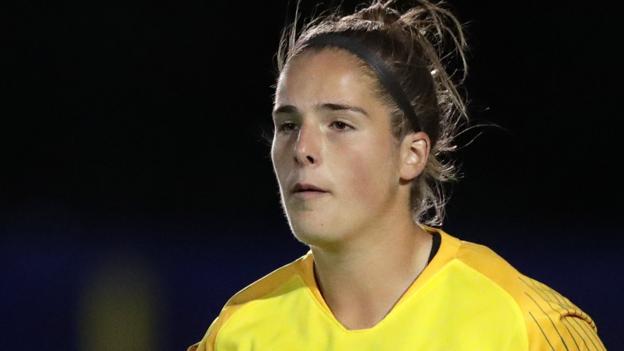 The 25-year-old alleges men in the crowd called on the referee to “check the gender” of several Palace players.

“It is something I don’t think should be at a women’s game – or any game. It is not acceptable,” she told BBC Sport.

The Football Association has been made aware of the incident, and is looking into it.

A spokesperson said the organisation is “committed to tackling homophobia, biphobia and transphobia in football at every level of the game.”

BBC London has contacted Coventry United but is yet to receive a response.

Gillett says the abuse came from a group of about eight men behind her goal during the first half at the Butts Park Arena.

“In my 18 years of playing, I’ve never had verbal abuse directly aimed at myself right behind my goal. It was an unpleasant experience.

“Maybe I should have walked off the pitch in that match.”

Gillett reported the comments to the referee at half-time, who then spoke to the general manager of Coventry United.

“At the time I wasn’t 100% sure of the protocol or what I was supposed to do,” she added. “I tried to just ignore it and continue with the game.

“The behaviour was better in the second half, but still not completely controlled and quite intimidating for the team.

“I can’t say what should have happened or shouldn’t have happened, but for me to be verbally abused for 45 minutes – to anyone that is unacceptable.

“If we are going to see more of these incidents in the women’s game, then there needs to be protocols of what teams and security should be doing if they come across this kind of situation.”

Coventry United Ladies won the match 3-2, lifting them up to sixth in the table and above Palace on goal difference.

The FA spokesperson added: “We continue to work with partners across the game, such as Stonewall and LGBT fan groups, to encourage fans and players to report abuse, both at a national and county FA level, and work with the leagues, campaign groups and the statutory agencies to sanction and educate perpetrators.”