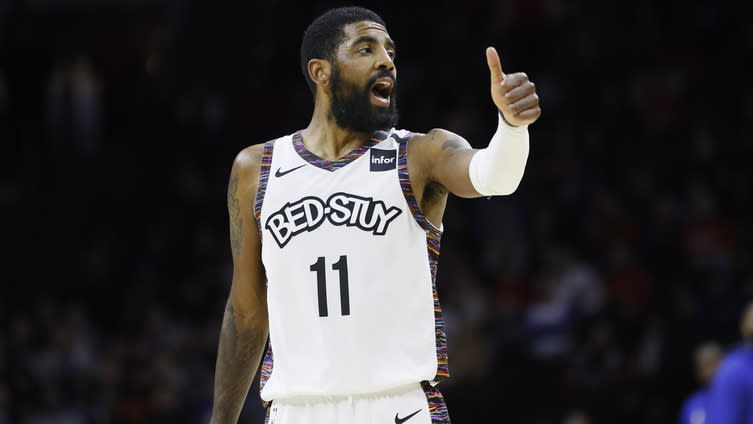 Irving’s Brooklyn Nets fell 117-106 to the Philadelphia 76ers on Wednesday, their eighth loss in 10 games that dropped them to 18-22 on the season.

After the game, Irving was asked how much work the Nets need to do to compete a championship level and gave an honest if rather blunt answer.

LIVE stream the Celtics all season and get the latest news and analysis on all of your teams from NBC Sports Boston by downloading the My Teams App.

“I mean, it’s transparent. It’s out there. It’s glaring, in terms of the pieces that we need in order to be at that next level,” Irving said, via ESPN’s Tim Bontemps.

Irving then listed the “pieces” he feels are good fits in Brooklyn after essentially asking the Nets to bring in more talent.

“We’re going to do the best with the guys that we have in our locker room now, and we’ll worry about all the other stuff, in terms of moving pieces and everything else, as an organization down the line in the summer,” Irving said.

“Collectively, I feel like we have great pieces, but it’s pretty glaring we need one more piece or two more pieces that will compliment myself, KD [Kevin Durant], DJ [DeAndre Jordan], GT [Garrett Temple], Spencer [Dinwiddie], Caris [LeVert], and we’ll see how that evolves.”

Irving took a similar tactic early in the Celtics’ 2018-19 season, openly suggesting the team should sign a 14- or -15-year veteran to show Boston’s younger players what it takes to win a championship.

Irving’s tactic backfired: President of basketball operations Danny Ainge said he was “not even sure” what Irving meant by those comments, while those young Celtics players bristled at the notion they needed a veteran to guide them to championship contention.

Boston’s chemistry issues persisted throughout the season, and Irving, finding the situation untenable, bolted to Brooklyn after a second-round playoff exit.

The 27-year-old is still intent on playing GM, though — even though much of the Nets’ struggles stem from him playing just 14 games this season while Durant is out for the whole year.

Will the Brooklyn players Irving didn’t name as “great pieces” take offense to his comments Wednesday? Time will tell, but history suggests this isn’t the best way to motivate your teammates.

Don’t miss NBC Sports Boston’s coverage of Celtics-Bucks, which begins Thursday at 7 p.m. with Celtics Pregame Live. You can also stream on the MyTeams App.