Kyrie Irving on Nets: “We need one more piece or two more pieces”

Kyrie Irving on Nets: “We need one more piece or two more pieces” 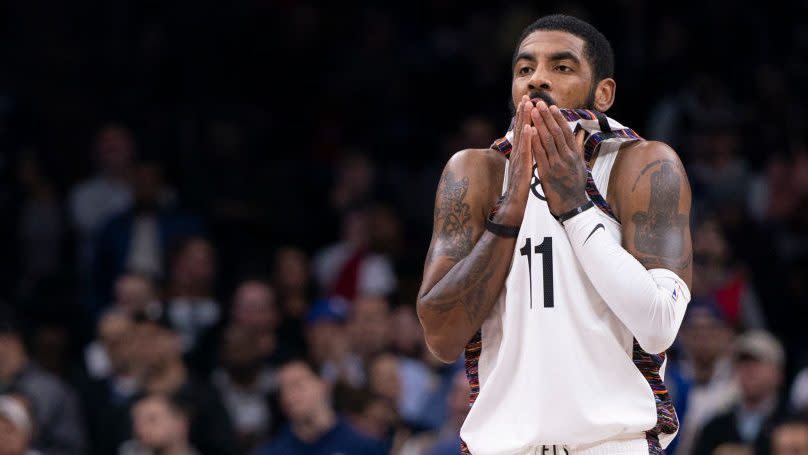 With Spencer Dinwiddie leading the way, the Brooklyn Nets scrapped and clawed their way to a 13-13 record while Kyrie Irving was out dealing with his shoulder bursitis (that’s what it was, no matter how the Nets try to spin it).

Irving’s back, the Nets have gone 1-2 with him, and already he sounds like, well, Kyrie Irving.

After Wednesday’s loss to Philadelphia — where the Sixers, not Irving, took over the fourth quarter (31-16) — Irving did not exactly give the Saint Crispin’s Day speech to fire up the troops for battle. Here’s the full quote, via Tim Bontemps of ESPN:

“I mean, it’s transparent. It’s out there. It’s glaring, in terms of the pieces that we need in order to be at that next level,” Irving said… “I’m going to continue to reiterate it. We’re going to do the best with the guys that we have in our locker room now, and we’ll worry about all the other stuff, in terms of moving pieces and everything else, as an organization down the line in the summer.

“It’s just something that we signed up for. We knew what we were coming into at the beginning of this season. Guys were going down left and right. [Garrett Temple] is out, [DeAndre Jordan] just got hurt tonight, Wilson [Chandler] is coming back. We’ve got complimentary young guys as well that have done a great job the last three years.

“Collectively, I feel like we have great pieces, but it’s pretty glaring we need one more piece or two more pieces that will compliment myself, [Kevin Durant], DJ, GT, Spence [Dinwiddie], Caris [LeVert], and we’ll see how that evolves.”

Irving was 6-of-21 shooting against the Sixers and 1-of-7 in the fourth quarter, looking like a guy with some tired legs playing his first back-to-back since his return. He sounded frustrated and spoke his mind. This is what Irving does, but it opens him up to pushback, such as this from NBC’s own Tom Haberstroh.

Kyrie’s teammates seem to be faring OK without a certain piece https://t.co/rnEA8RlgTh

Do the Nets need more “pieces” to compete with the Bucks at the top of the East?. Probably. But how is it fair to judge that — or call out the franchise like that — when Irving just returned from injury, Kevin Durant is likely out for the season, Caris LeVert also just back from injury, Garrett Temple out, and all the new faces still adjusting to playing next to each other. Irving knew what he signed up for, this season was always a placeholder until the Nets got healthy next season.

At the franchise’s lowest point, the Nets brought in Sean Marks as GM, hired Kenny Atkinson as coach, and built a Spursian “team first, lunchpail work ethic” squad — one that ground its way to the playoffs last season without “stars.” That same style and identity were behind the team that went 13-13 without Irving to get back in the playoff mix this season.

The Nets have an identity. With Irving now, and Durant over the summer, the Nets will add elite talent to that mix, but also two big egos, guys used to winning by doing things their way. It’s an interesting chemistry experiment, one that could end a number of different ways.

Already we see some chemistry reactions, and things could get interesting going into the summer.