Kyrie Irving keeps undermining his own leadership, even if he doesn’t mean to

Kyrie Irving keeps undermining his own leadership, even if he doesn’t mean to 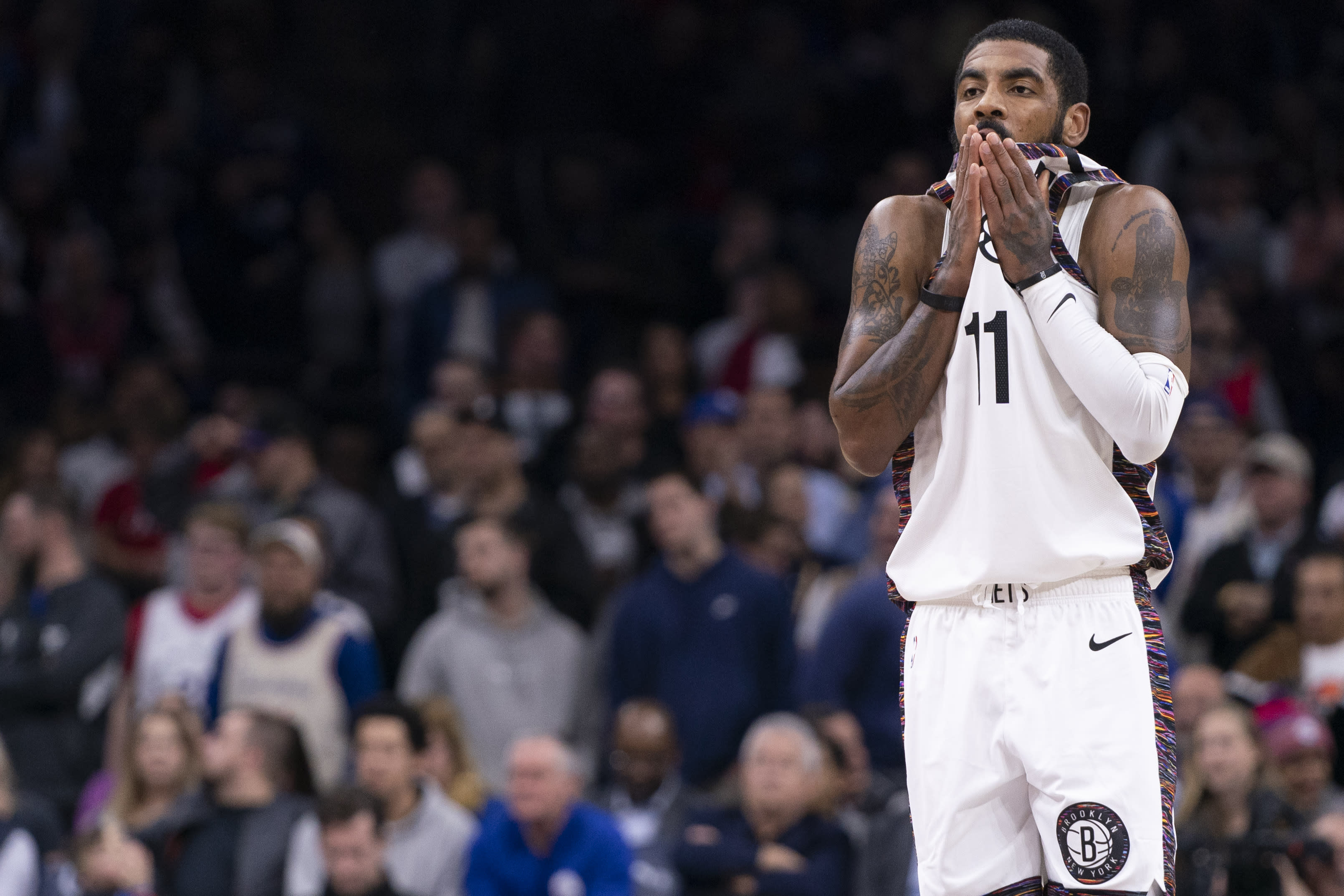 “In terms of me being a leader in that environment and bringing everyone together, I failed,” Kyrie Irving said of last season’s chemistry issues with the Boston Celtics at this season’s introductory press conference with the Brooklyn Nets back in September. “So, for me, it’s just a huge learning experience to slow down and acknowledge that I’m human in all this, and then also take my steps going forward.”

Fast forward four months — two of which Irving missed to a shoulder impingement — and the 26-year-old six-time All-Star does not appear to be applying the leadership lessons he supposedly learned. After a 117-106 loss to the Philadelphia 76ers in his third game back injury, Irving’s honest assessment of the Nets echoed similar sentiments that fractured Boston’s locker room and led to his free-agent departure.

Those comments in response to a question about team needs, via ESPN’s Tim Bontemps:

“I mean, it’s transparent. It’s out there. It’s glaring, in terms of the pieces that we need in order to be at that next level. I’m going to continue to reiterate it. We’re going to do the best with the guys that we have in our locker room now, and we’ll worry about all the other stuff, in terms of moving pieces and everything else, as an organization down the line in the summer.

“It’s just something that we signed up for. We knew what we were coming into at the beginning of this season. Guys were going down left and right for us. [Garrett Temple] is out, [DeAndre Jordan] just got hurt tonight, Wilson [Chandler] is just coming back. We have complementary young guys as well that have done a great job the last three years.

“Collectively, I feel like we have great pieces, but it’s pretty glaring we need one more piece or two more pieces that will complement myself, [Kevin Durant], DJ, GT, Spence [Dinwiddie], Caris [LeVert], and we’ll see how that evolves.”

It is hard to argue against anything Irving said, although a healthy Durant should be the only piece Brooklyn needs to elevate its current roster to championship contention. Dinwiddie and LeVert have been among the league’s most talented non-All-Stars the last two seasons, and the Nets feature a handful of other talented complementary players that plenty of contenders would covet in trades.

A Nets team that finished 42-40 en route to a sixth seed in last season’s Eastern Conference playoffs swapped D’Angelo Russell for Irving, whose recruitment efforts over the summer helped replace Ed Davis with DeAndre Jordan and reshuffle a few veteran wings. These were viewed as upgrades, even with Durant sidelined until next season with an Achilles injury. Except, this year’s edition is on pace to win roughly 36 games and finish eighth in the East. They are 5-9 with Irving and 13-13 without him.

Two names were conspicuously absent from Irving’s comments: Joe Harris and Jarrett Allen, respectively one of the game’s best shooters and an efficient 21-year-old rim protector. They started for a team that gave last year’s Sixers more trouble in the playoffs than Irving’s Celtics gave the Milwaukee Bucks. We should probably note that Harris and Allen are better than Temple and Jordan, the two guys who Irving urged the Nets to sign and who he included on his short list of core players on a contender.

Three games removed from watching his teammates play the Nets back into playoff contention without him, on a night he shot 6-for-21 from the field and finished with a team-worst minus-29 rating, is not the best time for Irving to publicly raise his concerns about Brooklyn’s roster construction, even if he is right.

I asked Kyrie the question that elicited the response about the roster and 1) he was smiling and answer felt off the cuff so I seriously doubt it was a planned/calculated critique, 2) he’s right, 3) the only way to upgrade the roster is via trade

Scratch that: There is never a good time to tell the media several of your teammates should be traded this summer. Now, you could argue Irving did not properly convey what he meant, which has been an ongoing issue for him, or maybe he merely forgot to mention Harris, Allen and Taurean Prince, another hardworking 25-year-old who plenty of teams would not mind having as an affordable 3-and-D forward.

If that is the case, an apology is probably coming, unless Irving opts not to communicate with his teammates, as he has reportedly done in Cleveland, Boston and Brooklyn to the dismay of many.

But Irving’s overall point is clear: He does not believe the team as currently constituted, with the addition of Durant, can compete for a title next year. That may be true. It is also something he should have only shared privately with Nets general manager Sean Marks. It certainly is not the best way to lead this team for the remainder of a season he apparently views as a lost cause. There can be no doubt that some players in Brooklyn’s locker room now wonder if they are the chum Irving wants to use as trade bait.

This is not all that different from when Irving returned to a Celtics team that had reached the 2018 Eastern Conference finals without him and suggested they needed veteran help a month into their follow-up campaign or when he called out Boston’s “young guys” for “not [knowing] what it takes to be a championship level team.” The latter criticism came almost a year to the day last season, around the time he was reportedly planning his exit from Boston and before he learned his leadership lesson.

Following his comments last January, Irving called ex-teammate LeBron James, who has also been unafraid to request roster improvements through the media when his team is underachieving. Irving apologized to James for “being a 22-year-old kid” who “wasn’t seeing the big picture,” likening his newfound leadership to LeBron and the inexperienced Celtics to his petulant younger self. After Jaylen Brown called him out, Irving issued a public apology that came off as further criticism of his teammates.

“I did a poor job of setting an example for these guys of what it’s like to get something out of your teammates,” Irving said then. “You say something publicly, and it ends up being received in so many different ways, and you never know how fragile or what guys are going through when you say things like that. You expect results, but … I should’ve kept it in-house, so going forward I want to test these young guys, but not publicly like that. I want to get the best out of them, but I can’t do it publicly like that.”

Wise words to follow. Maybe Irving should heed them if he wants to lead.