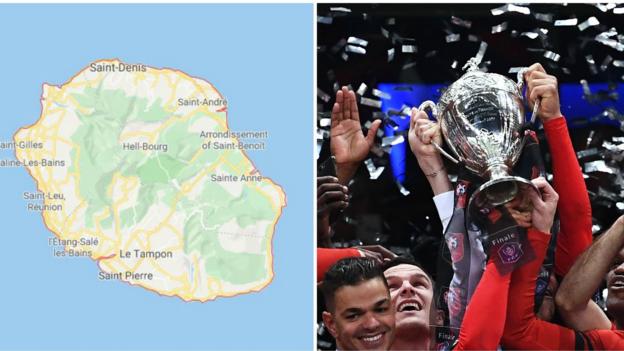 If you are going to travel 6,000 miles for every game you might as well ensure you make history in the process.

That’s exactly what amateur side JS Saint-Pierroise – from the volcanic Indian Ocean island of Reunion – have done by reaching the last 32 of the French Cup.

Reunion is a French overseas territory and, as such, its teams are eligible for the competition. On Saturday they will face SAS Epinal, becoming only the second overseas team to reach this stage after Guiana side ASC Le Geldar.

Saint-Pierre have won the Reunion Premier League for five consecutive seasons but this achievement easily surpasses that.

To get this far the island amateurs had to defeat Ligue 2 side Niort 2-1 away from home in the last round. Overcoming a second-tier side is no easy task, especially when it takes an 11-hour flight just to get there.

In the Saint-Pierre side at Niort was former Blackpool midfielder Elliot Grandin, who joined at the start of the season, having decided he wanted to try something different. The Frenchman has ended up being part of one of his country’s biggest football stories of the season.

“It was crazy – all the people in the media spoke about the victory,” Grandin explains. “It’s never happened before so it’s been a very big thing. People are happy because it’s a rare story. It’s very good because people do not know much about Reunion football, so it’s a great opportunity for the players over there to show their talent and this is what we did. Now people take us seriously.”

The distance of travel has been a blessing in disguise, forcing the squad to make the journey a week in advance to avoid jet lag and prepare for the fixtures on the mainland.

“We stay in the hotel together, we prepare for a week before the game but it’s not easy as it’s quite far,” he adds. “It’s not easy to come every two weeks to play but we appreciate the time we spend in France.”

Surprisingly, given the logistical challenges, the club’s following across land and sea is incredibly dedicated. There were pyrotechnics and deafening chants once Niort were dispatched, with hundreds having travelled all the way from the middle of the Indian Ocean to the west of France.

“People are crazy about football over there. The stadium in Niort was full of Reunion people and I was like ‘wow, I know this guy – he comes to the stadium in Reunion every time. I know this guy and this guy’. They were singing, dancing and every time we play away in France the stadium is full of Reunion people – it is crazy. I don’t know how they do it with the travel but they keep coming back.”

Niort immediately sacked their manager after losing to this supposed bunch of amateurs but there is far more to the Saint-Pierre squad than meets the eye.

Grandin has played in Ligue 1 and the Premier League, having also represented France Under-21s. Last season ex-Liverpool striker Florent Sinama Pongolle – who is from Reunion – was on their books. Saint-Pierre-born Dimitri Payet, the France midfielder who spent 18 months at West Ham, was with them as a youth player.

“We were confident before the game because we have a good team with good players,” says Grandin. “We have some players who have played in professional leagues in France or England and we have some young talents, experienced players and very fast players.”

Next up is fourth-tier SAS Epinal, meaning the experienced Saint-Pierre side will be hoping they can repeat the trick to add another chapter to their story.

“For the island it is already history to make it to this round but we will do everything to carry on to the next one,” says Grandin.

“We have to spend the week preparing well, we have to be confident, we have to not forget to keep working and I hope we get to the next round.”

The club have made headlines around the world, which is appropriate as they have to travel around half of it for each match. Ian Holloway, the manager who brought Grandin to the Premier League, has been in touch with the midfielder to congratulate him on his latest success.

A win at the weekend would send them into the last 16 and offer another chance of drawing one of France’s biggest clubs. But even if they lose in Epinal, the Reunionese will still have plenty of which to be proud.