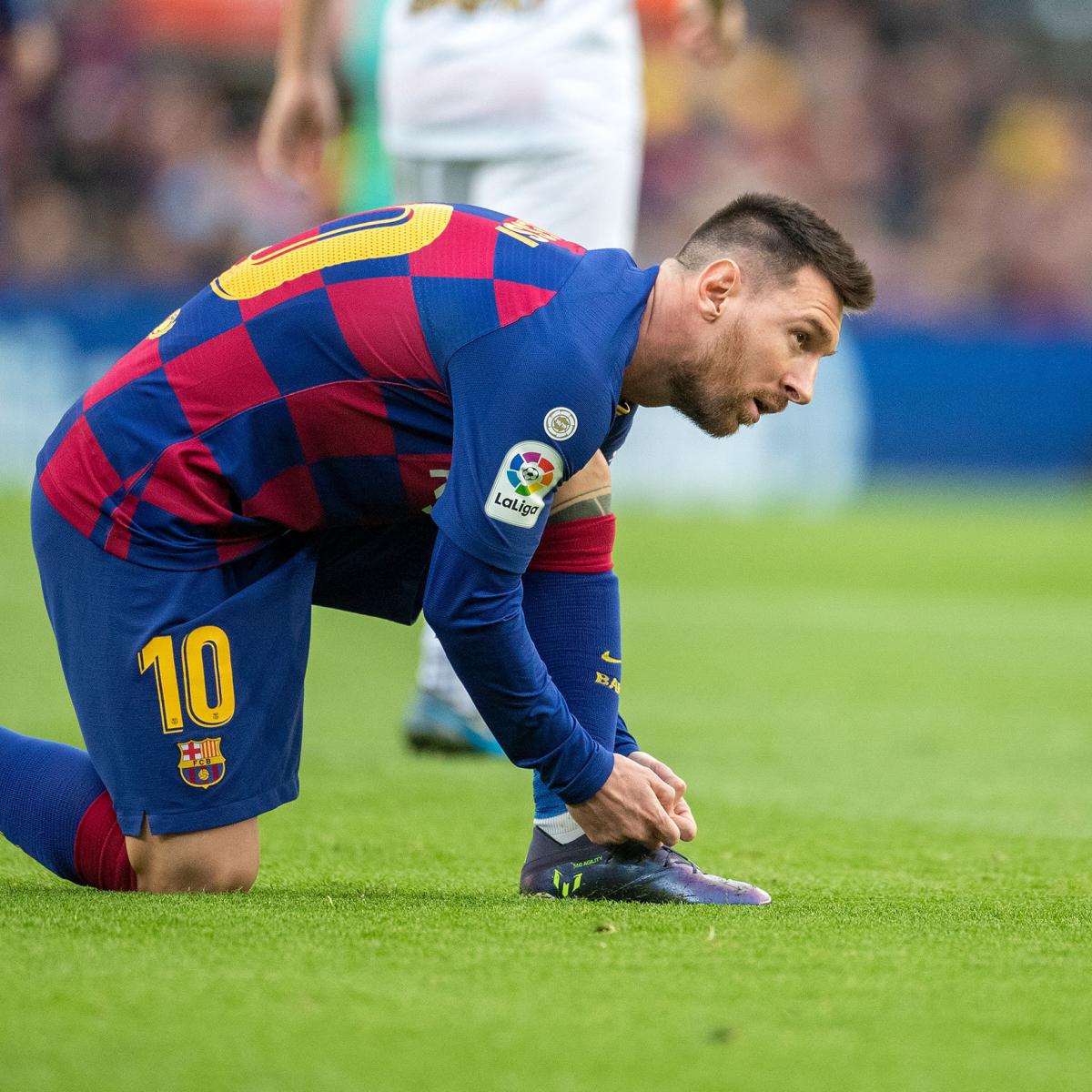 Find someone who looks at you the way the world’s leading boot manufacturers look at their most famous clients.

When it comes to fulfilling the wishes of the footballers on their books, major boot brands such as Nike, Adidas and Puma are prepared to pull out all the stops. For players at the pinnacle of the sport, that can mean personalised boots, such as the pair designed by New Balance to celebrate Sadio Mane’s coronation as Africa’s Player of the Year, or even signature clothing ranges, like Kylian Mbappe’s recently launched Bondy Dreams collection with Nike.

Further down the food chain, top-level players know the companies that make their boots are prepared to accede to their every whim.

“Nike are great,” Liverpool midfielder James Milner wrote in his book, Ask a Footballer. “They don’t just give you their boots to wear. They’ll make whatever modifications you want. I’ve had a few foot injuries in the past, so they have produced a carbon plate for me to put in the bottom of the boot and make it more rigid. Any change you might want to make, no matter how small, they’re willing to do it.”

Then, of course, there is the money. Cristiano Ronaldo’s lifetime deal with Nike is reported to be worth over $1 billion, and Lionel Messi’s partnership with Adidas is believed to earn him upwards of $12 million per year. A report by Sam Wallace of the Daily Telegraph in August said that Nike subsidiary Air Jordan was prepared to pay Raheem Sterling £100 million to become one of the faces of its football operation.

In addition to the basic fees that players will be paid to wear a certain brand’s boots, there are also performance-related bonuses that can take their boot-related earnings even higher, as Peter Crouch explained in How to Be a Footballer.

“With boots your deal will include a retainer, a bonus for playing a certain number of Premier League games, another for goals scored, then Champions League games and goals,” the former England striker wrote. “In 2007, the year Liverpool reached the Champions League final and I played pretty much every game for England, I doubled the value of my deal.”

As astronomical as the figures associated with boot deals can be, players tend not to put pen to paper until they are happy the boots they will be wearing will help them do the business on the pitch. Ehsen Shah, who works with several well-known footballers in his role as founder of sports marketing agency B-Engaged, says that in his experience, comfort is the uppermost consideration when players are deciding which boots to slip onto their valuable feet.

When a player signs a deal with a boot manufacturer, there is usually an obligation for them to also wear that brand’s clothing for commercial appearances. While access to a steady stream of box-fresh T-shirts, hoodies, baseball caps and trainers may seem like a tidy arrangement, it can be a double-edged sword.

“Categories of endorsements that a player can enter into outside of a boot deal can be pretty restrictive,” says Daniel Geey, a sports lawyer who has worked on multiple boot-deal negotiations.

“I’ve seen times when a player has signed a boot deal thinking it’s just for wearing, say, Adidas clothes, for example, but it actually covers moisturisers, skincare, electronic goods, headphones and sunglasses. Another brand approaches the player and says, ‘Do you want to model our new skincare range?’ The player says, ‘Yeah, that fits in with my idea of the type of stuff I want to be doing.’ But they then look back at the boot deal and realise that that’s within the remit of that boot deal. Or even worse, they go ahead and sign the deal, and realise they’re possibly in breach of their boot deal, which creates significant problems.”

One of the clients on B-Engaged’s books, a player from a “Big Six” Premier League club, ran down a boot contract with a major sportswear firm last year because it was preventing him from striking commercial deals outside football.

“His point was, ‘I’ll wear the boots as long as the boots are good, but I can’t go and do other things,'” explains Shah. “We were able to go and do three other deals outside of sport in the fashion space which, if he was with a boot brand, he wouldn’t have been able to do.”

A further complication arises when a player has a boot deal with a different brand to the one that sponsors his club and/or national team. Messi, for example, must wear Nike kit when on Barcelona duty, while Ronaldo has to don Adidas kit each time he represents Juventus. Players like Neymar (Nike) and Gareth Bale (Adidas) need not worry about absent-mindedly wearing the wrong hat to the wrong promotional event because their individual brand, club brand and national team brand are all the same, but in Geey’s words, things can get “pretty complicated” when that is not the case.

The value to a major boot firm of a big-name endorsement means that when a free agent appears on the market, such as when Romelu Lukaku cut his ties with Nike in 2017, it provokes an almighty scramble. The then-Manchester United striker wore blacked-out Nike and Adidas boots during the 2017-18 season, seemingly in the hope of creating a bidding war between the two, before eventually plumping to sign with Puma in what ESPN reported to be the company’s biggest-ever endorsement deal.

On Romelu Lukaku’s boots: Nike and him didn’t reach an agreement over a new deal. Lukaku scored and missed on Nike &amp; Adidas this season. #mufc https://t.co/x060fc6DM5

The quest for marketing superiority also means that players are increasingly being signed to boots deals while still in their teens, with Manchester City midfielder Phil Foden (who was 14 when he signed up with Nike), Eduardo Camavinga of Rennes and Bayern Munich’s Canadian winger Alphonso Davies among the players who have penned sponsorship agreements well before their 20th birthdays.

“Aided and abetted by parents who have an eye on getting their kids into football, these deals are getting [made when players are] younger and younger,” sports marketing expert Tim Crow tells Bleacher Report. “The trend is very much about signing up players long-term as young as possible.”

Given the huge commercial value of a high-profile endorsement, it may be tempting to assume that the big boot companies are constantly looking to poach players from rival firms, but the reality is more nuanced. To begin with, boot deals invariably include clauses that allow firms to match any rival offers their clients may receive when their existing contracts are coming to an end.

“If the incumbent brand wants to renew, they’ll have a period of time to provide that offer,” explains Geey, who is the author of Done Deal: An Insider’s Guide to Football Contracts, Multi-Million Pound Transfers and Premier League Big Business.

“It can be rejected, but usually alongside that there’ll be a period built in for the player and his agent to go out to market and receive potential offers. What then can happen is that those offers have to be provided to the incumbent brand in order for them to potentially match the offer. The usual approach is that if that offer is matched, the incumbent [brand] automatically triggers that matching obligation and the player has to re-sign with the incumbent. If they’re not able to match, then they’re free to go out into the market and accept that offer from somebody else.”

Another obstacle is what is known as a “post-term restriction,” which is a clause that prevents a player from announcing an agreement with a new brand until a set period of time—perhaps three to six months—has passed since his previous deal expired.

New Balance may soon no longer be Liverpool’s kit supplier but the company continue to celebrate their link with the Reds. They saluted Mane being named African Player of the Year with billboards in both Senegal capital Dakar and Liverpool, and a new pair of customised boots. https://t.co/xyDYfQ0Bc0

Agents will often test the water to see what might be out there for their clients (“A quiet word is had from time to time,” says Crow), but ultimately brands know there is little that can be done to break a player out of an existing deal if it still has years left to run. (When Marouane Fellaini fell out with American firm New Balance in 2017 over the terms of his deal, the two parties ended up in court.)

“There’s a common respect amongst brands,” says Shah. “It’s a case of, ‘That player’s in a contract with you—we’re not going to talk to them until we’re contractually allowed to.’ You will get people—family members or inexperienced agents—who don’t know these given rules in the industry who will try to talk to a brand. But it’s never actively done by the brands.

“And they’re in very long-term contracts, these guys. It’s not like you’re in a one-year or a two-year contract. They tend to be four, five and sometimes 10 years. So you don’t really get that opportunity to poach. It’s not like a football agency or football club mentality, where you can buy someone out. It doesn’t happen.”

When it comes to picking a boot deal, a good fit is everything.