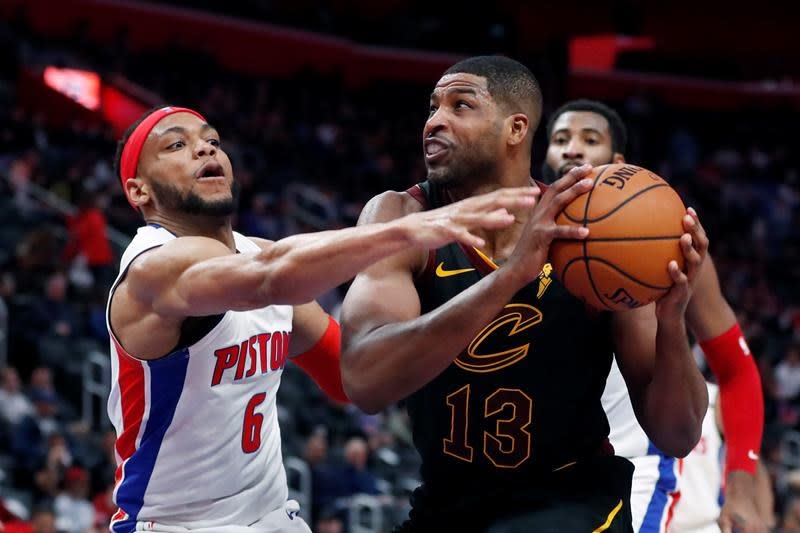 Tristan Thompson gleefully bounded around the Cleveland dressing room, his teammates enthusiastically showering him with buckets of water. The Canadian centre had just scored a career-high 35 points as the Cavaliers, desperate for any shred of good news, fought to a 115-112 overtime win at Detroit.

Thompson’s performance in Thursday’s match, which included 14 rebounds, three assists, a steal and three blocks, helped lead the lowly Cavaliers to just their 11th win of the season. While that hardly seems like a cause for a locker-room blowout, it came at a time the Cavs had more to worry about than simply their lowly place in the Eastern Conference standings.

It was Cleveland’s first game since coach John Beilein apologized for an intended compliment that landed way off the mark during a film session, when he reportedly said his team was no longer playing like “a bunch of thugs” (he claims he meant to say slugs). It also came on the heels of veteran Kevin Love admitting he had acted “like a 13-year-old” by publicly venting his frustrations over another lost Cavaliers season.

Rather than come out flat, deflated by the off-court night, the Cavaliers looked inspired against the Pistons behind key performances by Love, who scored the winning three-pointer, and especially Thompson. The Brampton, Ont., centre’s big night not only helped end a five-game losing streak for the Cavaliers, but it highlighted his reputation as a leader.

“We motivate each other, at the end of the day — especially myself and Kev,” Thompson, who is having perhaps his finest NBA season even as the Cavs struggle, said after the game. “It’s on us to motivate our teammates. Coach’s job is to give us the scout and the game plan, but we don’t need no coaches at all to motivate us. Us as players, we motivate each other.”

Thompson, whose previous career-high for points in a game was 29 back in 2012-13, his second season in the league, has been leading by example by doing more offensively for the talent-poor Cavs this season. Heading into a game Tuesday night in Los Angeles against the Clippers, Thompson was averaging 13.1 points a game, a career high and well above his career average of 9.4.

While most of his scoring still comes around the basket, he has developed a reliable hook shot over the last two seasons to give him more offensive versatility. And while he will never be mistaken for Steph Curry, he has even connected on three of his modest eight three-point attempts this season. He had gone 0-for-9 from long range over his first eight campaigns.

Thompson, 28, is in the last year of his five-year, US$82-million contract and will become an unrestricted free agent after the season, meaning his days in Cleveland could very well be numbered. There is a chance he lands on a contender looking for playoff experience rebounding and interior scoring, and failing that he may try to find a landing place with a more competitive club after the season.

Thompson was drafted fourth overall out of Texas in 2011 — the same year the Cavaliers took guard Kyrie Irving first overall — to help a rebuilding Cavaliers team that finished a league-worst 19-63 the previous season.

The team continued to struggle until superstar LeBron James returned to the Cavaliers for the 2014-15 season and led the Cavaliers to four straight NBA Finals against Golden State, including a title in 2016. Over that time Thompson enjoyed being on the winning side of three straight demoralizing playoff wins over his hometown Toronto Raptors.

The Cavaliers fell back to earth after James led for the Los Angeles Lakers in 2018, finishing with 19 wins last season and on pace to be among the league’s doormats this year. The Cavaliers (12-28) were ahead of only New York and Atlanta in the East entering Tuesday’s game.

Thompson will probably not celebrate another championship in the Cavs dressing room, but Thursday’s humble but joyful imitation will ensure he has at least one more good memory from his time as a stalwart for the wine-and-gold.

20-20 VISION — Oklahoma City’s Shai Gilgeous-Alexander continued his star-making sophomore season with his first career triple-double, putting up 20 points, 20 rebounds and 10 assists in the Thunder’s 117-104 win over Minnesota on Monday. The guard from Hamilton, Ont., is the second Canadian to record a triple-double (Steve Nash did it three times), and joins Shaquille O’Neal, Charles Barkley and Oscar Robertson as the only players to record a 20-20 triple double in their second season.

MR. EFFICIENT — Dallas centre Dwight Powell is shooting a career-high .621 from the floor this season, and he has been particularly efficient over his past five games. The Toronto native has been good on 27 of his last 35 attempts (77.1 per cent) over that span.

WHO’S NOT — Minnesota forward Andrew Wiggins has seen his scoring fall off since his return from a four-game absence with an illness. Wiggins, from Vaughan, Ont., has reached the 20-point mark just once in his last five games, after hitting that mark on 20 of his previous 26 outings.

AROUND THE LEAGUE — Rookie guard RJ Barrett of Mississauga had 23 points, five rebounds, three assists and two steals in the New York Knicks’ 124-121 upset of Miami on Sunday. … Raptors forward Oshae Brissett, from Mississauga, scored in double figures for the first time in his career when he dropped 12 in Toronto’s 101-99 loss to Portland on Jan. 7. … Denver guard Jamal Murray of Kitchener, Ont., had 24 points, five rebounds and three steals in the Nuggets’ 111-103 loss to Cleveland on Saturday.

KEEP AN EYE ON — Brooks and the Grizzlies look to continue their battle for a Western Conference playoff spot when they host Thompson and the Cavaliers on Friday.

CanaDunks, a weekly notebook on Canadians in the NBA, is published every Tuesday.

This report by The Canadian Press was first published Jan. 14, 2020.