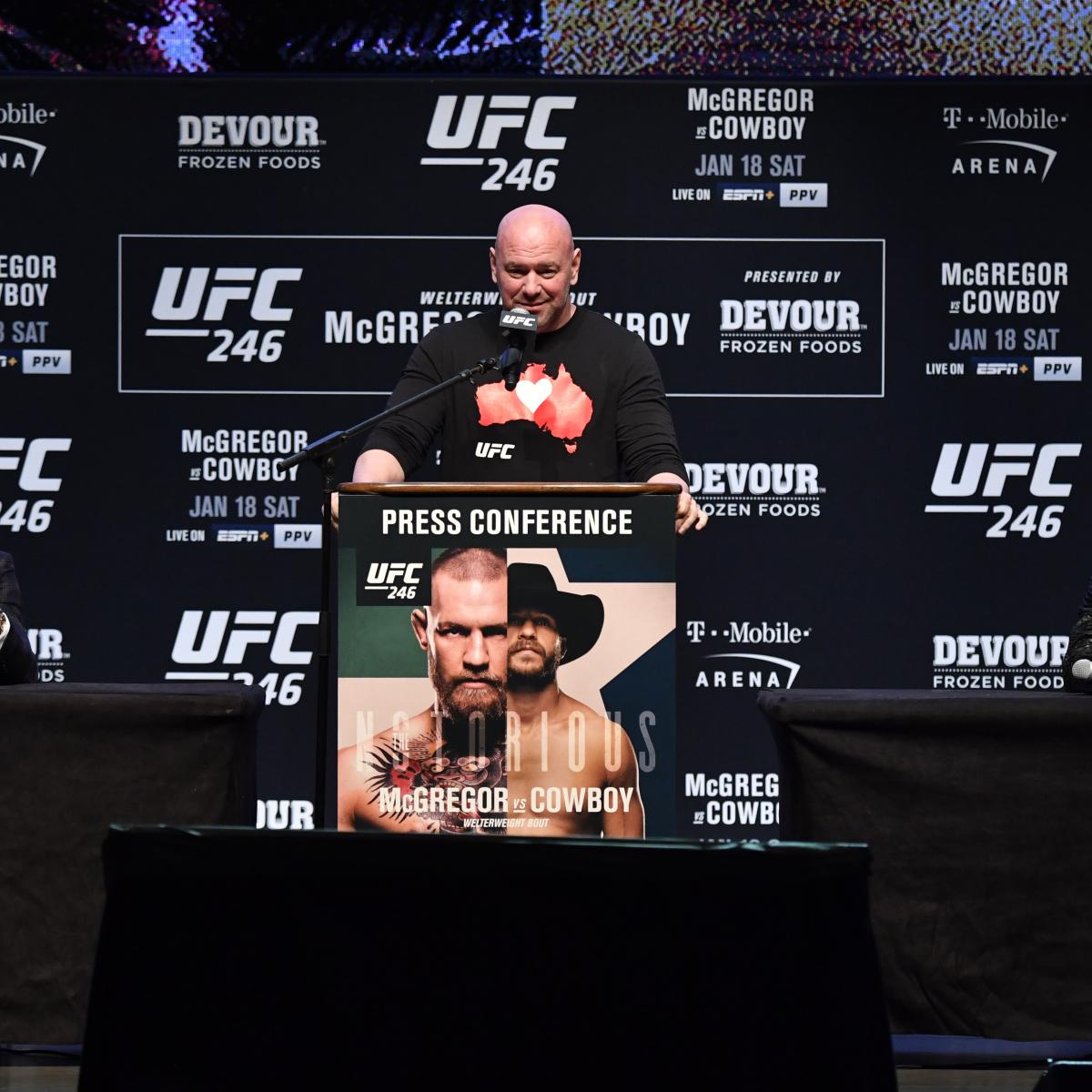 The talk between the two fighters, UFC President Dana White and reporters covered a wide range of news days before the fight at T-Mobile Arena in Paradise, Nevada.

Here’s a look at some of the most pertinent moments from the presser.

McGregor and Cerrone were cordial and friendly toward each other, with the former fighter stating multiple times that no “bad blood” would be spilled in the Octagon.

McGregor: It’s hard not to respect Donald. Although there will be blood spilled, it will not be bad blood. As for the Mystic Mac prediction, it will be a KO. #UFC246

He did, however, note that blood would be spilled.

The “no bad blood” refrain was confirmed with some friendly banter between the two about Cerrone’s python-skin suit, and both noted that PETA could be after them for their choices of attire.

Former NFL wide receiver Chad Ochocinco asked McGregor on behalf of Bleacher Report whether he should bet on the Irishman.

Reporter asks Conor whether he should bet on him: “Welcome to the UFC. … I’m going to be going for the knockout.” #UFC246

McGregor was naturally confident in his abilities to take down Cerrone, noting that his opponent was easy to read:

Cerrone had a jab ready in return:

“I can read Donald like a children’s book.” McGregor not worried about anything Cerrone got in his back pocket. Cerrone says “I hope he brings his Hooked on Phonics.” #UFC246 #McGregorVsCowboy #McGregorvsCerrone

Cerrone: For all you analysts thinking Conor doesn’t have a ground game, get a life. #UFC246

Reporter Morgan P. Campbell was shouted down by the fans after asking McGregor about the status of sexual assault allegations made against the fighter.

A journalist asking about the reports of sexual assault investigations into McGregor is booed and jeered down by the fans here at the #UFC246 press conference.

Tariq Panja of the New York Times reported in October that McGregor was being investigated over a second sexual assault allegation.

Cerrone and White responded as follows during the presser:

McGregor denied the allegations in an interview with ESPN’s Ariel Helwani that aired Monday:

In his sit-down with @arielhelwani ahead of #UFC246, @TheNotoriousMMA preaches patience and denies the allegations made against him. https://t.co/ENLB10Z9MZ

Aaron Bronsteter of TSN defended Campbell in light of the crowd’s criticism:

Disappointed in how the crowd here treated @MorganPCampbell, a true professional in this industry. Whether you like or dislike a question, show some respect to a man who is just trying to do his job.

If McGregor beats Cerrone, a fight with Jorge Masvidal or Kamaru Usman could loom. McGregor gave his takes on both:

Masvidal or Usman? Conor says “I’d take both. I’d like that BMF title. To me, the gold has more significance to it. … I thought we were robbed of a classic” in BMF fight.” Likes Masvidal matchup better than Usman, who has a “sniff the jockstrap” style.” #UFC246

Usman is the welterweight champion. Masvidal is ranked as the No. 3 contender for the belt. McGregor has not fought either man yet.

Conor talks about his efforts to aid the Australian fire relief efforts: “The world is with them. Godspeed, Australia.” #UFC246