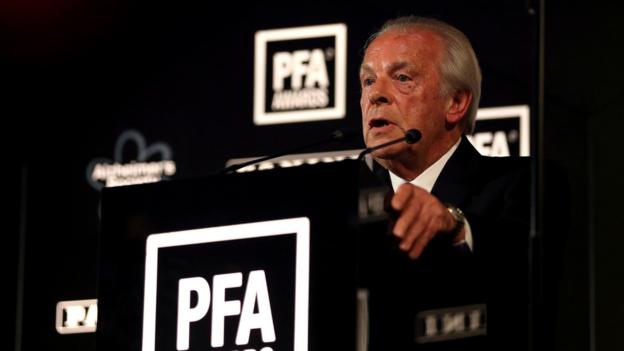 The Professional Footballers’ Association charity is being investigated over “serious concerns” about the way it is run.

The Charity Commission has opened a statutory inquiry, which is “the most serious intervention” it can make.

One of the focuses of the probe will be the way the charity is managed by its eight trustees, including PFA chief executive Gordon Taylor.

The charity helps support past and present players.

The development could put more pressure on Taylor.

The 74-year-old agreed to stand down 10 months ago after 39 years in charge, but he remains in post pending an independent review of the PFA.

In a statement the PFA said: “The trustees have continued to co-operate fully, openly and transparently with the Charity Commission and will continue to do so throughout this process.

“The trustees are all committed to adopting the highest possible standards in administering, governing and the management of the charity and will continue to work with the Charity Commission.”

In November 2018 the Charity Commission opened a regulatory compliance case into the PFA charity “to explore concerns raised about (its) relationship with the PFA and their management of conflicts of interest”.

On its website the charity says it “helps support players both during their football career and beyond, in areas such as coaching, education, wellbeing, equalities and community”.

Over the past year the commission has met with trustees, but now says that “despite extensive engagement (it) continues to have serious concerns which have led to the opening of this inquiry”.

Stephen Grenfell, head of investigations, monitoring and enforcement at the Charity Commission, said: “The public rightly expect charities to operate to the highest standards – across all they do.

“Serious concerns have been raised about the way the Professional Footballers’ Association charity is run.

“We will now examine what has happened at the charity through a full statutory inquiry and ensure, where necessary, action is taken.”

The commission said it intends to publish a report into its findings.

In November 2018 it emerged that PFA Charity accounts included ‘staff costs’ of £4m.

But there was no further detail given about how that sum was broken down, and elsewhere in the accounts it is stated that “no salaries or wages have been paid during the year”.

When asked if his hugely controversial salary was paid, either directly or indirectly, via the charity fund, the PFA declined to comment.

In March 2019, after a revolt by hundreds of former and current players amid a dispute with PFA chairman Ben Purkiss, Taylor announced he would stand down following the conclusion of an independent QC-led review of the PFA.

However, that is still thought to be several months away from completion, and he remains in the post he took up in 1981.

The Charity Commission inquiry will examine: