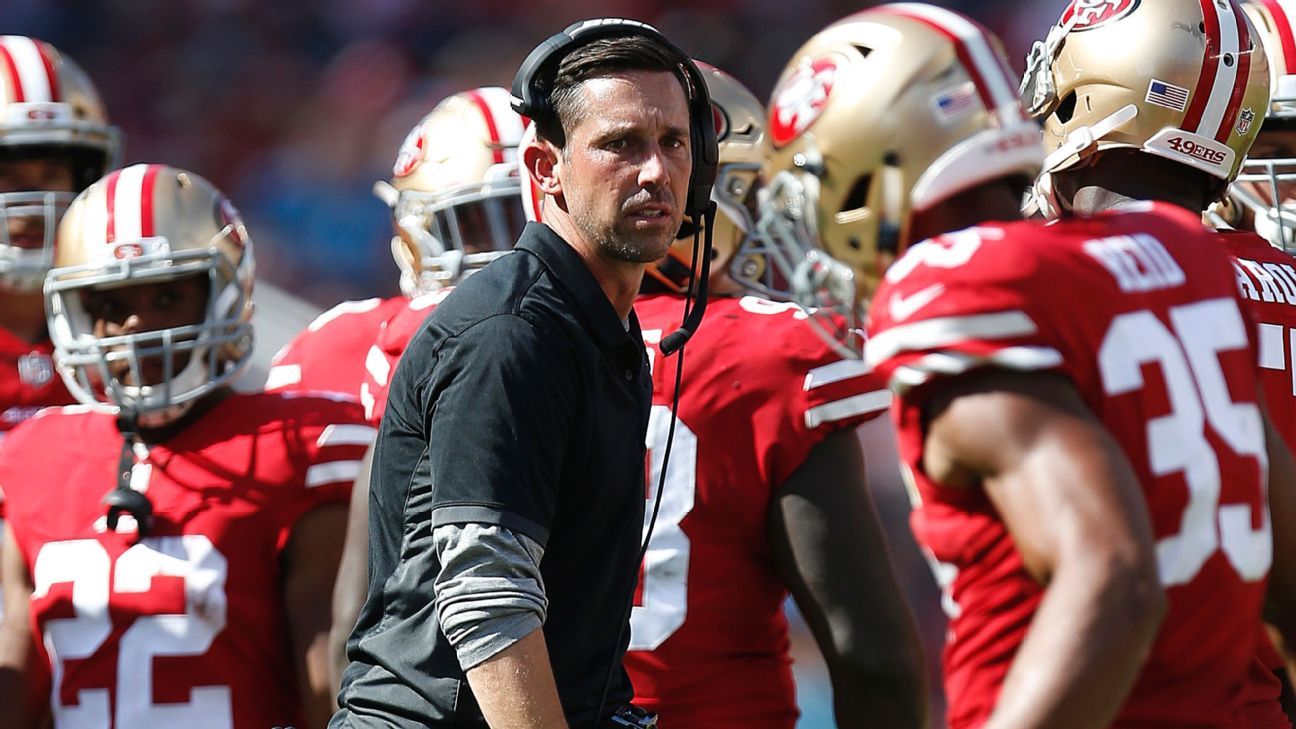 SANTA CLARA, Calif. — As the Atlanta Falcons offensive coordinator in 2015, Kyle Shanahan remembers getting drubbed by the Carolina Panthers in Week 14. Two weeks later, the teams met again and the Falcons handed the Panthers their only loss of the regular season.

It’s a memory at the top of Shanahan’s mind this week as his San Francisco 49ers prepare to host the Green Bay Packers for the NFC championship on Sunday at Levi’s Stadium.

Why? Because Shanahan’s Niners dominated the Packers 37-8 on Nov. 24, sacking quarterback Aaron Rodgers five times and limiting him to 1.7 net yards per pass play on 33 attempts. For as impressive as that win was, Shanahan doesn’t want his team believing it has any sort of bearing on what will happen in the biggest game of the season.

Instead, Shanahan has a simple message for his team this week.

“Don’t be that stupid,” Shanahan said. “That’s not real. This is about Sunday’s game … There’s so many stories like that. And this is the NFL, so no team, the game before never matters like that. There are four teams left and that’s four very, very good teams and it’s going to be a hard game for all of us.

“Also, our players — the type of guys they’ve been all year — I’m not concerned about that. They’ll have to answer that question, I’m sure, a lot. But I don’t think that will be a worry for our players, which means it won’t be for me.”

To Shanahan’s point, Sunday’s meeting between the Packers and 49ers will be the 37th time in the Super Bowl era that teams will meet in the playoffs after one team beat the other by at least 25 points during the regular season. The team that won the first meeting is 22-14 in the ensuing matchup, including 7-2 in conference title games, according to the Elias Sports Bureau.

Working in the 49ers’ favor is the fact that the team that won the first meeting has won nine straight times in the rematch. But those games have been much closer, with those wins by an average of 8.4 points. The largest margin in that group was 18.

The most recent team to lose a rematch after a dominant regular-season win was the 2010 New England Patriots against the New York Jets.

“I don’t think they’ve lost a game since then, so I think that game really holds zero relevance to what’s going to happen this Sunday.”

What will hold relevance is how different the two teams might look in this matchup. Green Bay should have tackle Bryan Bulaga back after he departed the first matchup in the first quarter with a knee injury. Assuming Bulaga is able to recover from the illness that limited him against Seattle on Sunday, he should be available against San Francisco.

The news is even better for the 49ers, who are considerably healthy entering this matchup after playing the first game without left tackle Joe Staley, defensive end Dee Ford, linebacker Kwon Alexander, running back Matt Breida and kicker Robbie Gould. Shanahan said Monday that the Niners have no new injuries to report and they should have their full complement of players available against the Packers, barring any practice injuries or setbacks.

One more prominent 49er, who will be available not only Sunday but next season, is defensive coordinator Robert Saleh. Saleh was a top candidate for the Cleveland Browns coaching job that ultimately went to Minnesota Vikings offensive coordinator Kevin Stefanski.

Shanahan said he found out Stefanski got the job when he was on his way to work on Sunday and he couldn’t hide his excitement to have Saleh for another year.

“I was pumped,” Shanahan said. “I was extremely excited. I definitely have some empathy for Saleh. Anyone who goes through that process and stuff, we’re all competitive, you want to win and you want to get that opportunity and stuff. But for Saleh, every year we keep him, we’ll be very fortunate.

“Saleh is going to be a head coach in this league. He could have been one this year. Most likely he’ll be one next year. But he’s going to have the right opportunity come around for him. It’s just a matter of time. I’m just very happy that we’re going to be able to have him coming into next year.”