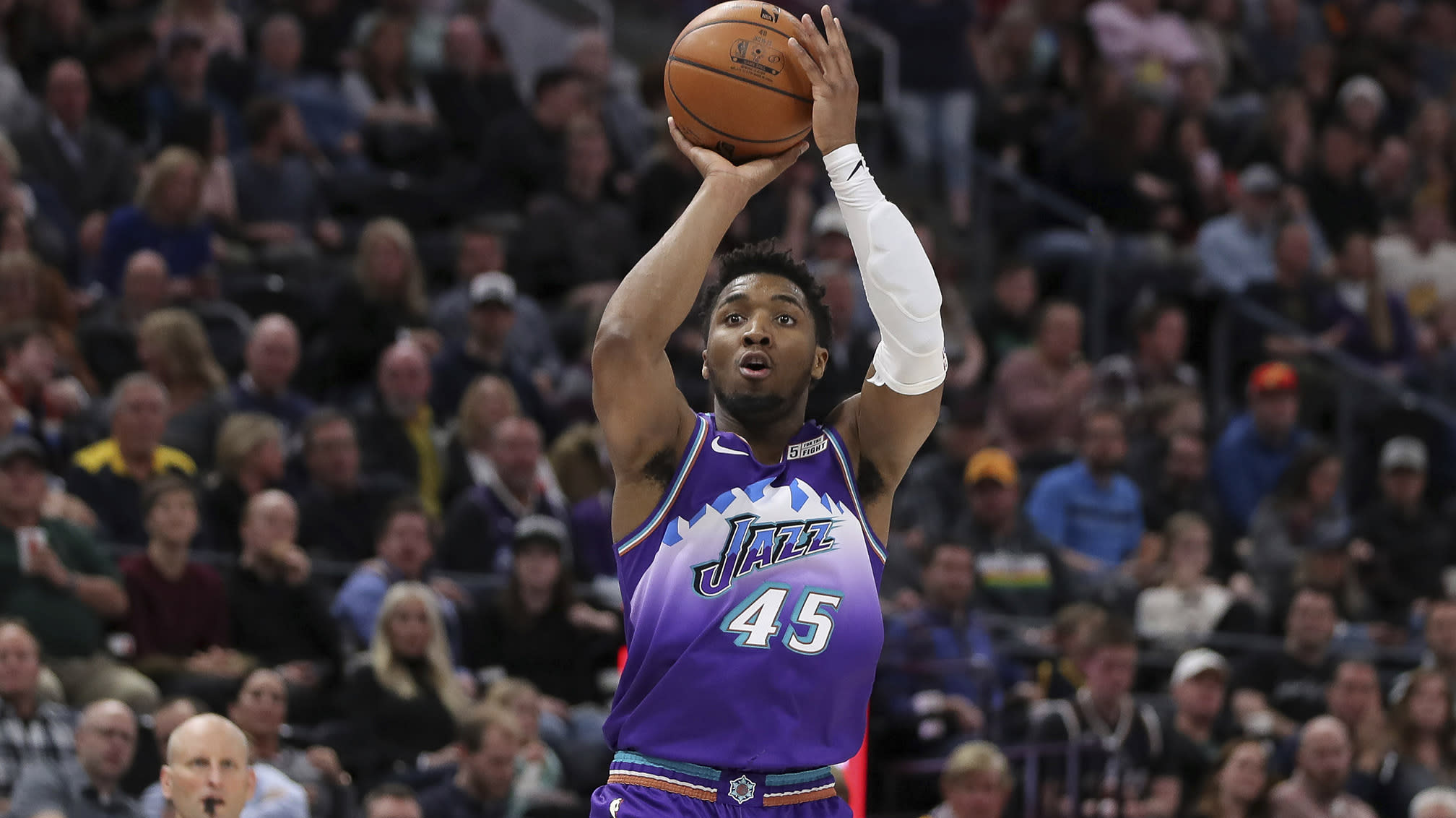 The Grizzlies climb inside the top-15 and the Jazz jumps all the way up to No. 3 overall, while the Milwaukee Bucks maintain the top overall spot in this week’s updated NBA Power Rankings.

1. Milwaukee Bucks
Record: 35-6
The Bucks wrapped a four-game road swing by winning each of the final three games on the trip. From here on out, Milwaukee won’t play more than three consecutive games on the road for the rest of the season. Over the last two months, the Bucks are a 29-3. During this 32-game stretch, Milwaukee has a league-best Net Rating of 12.8. No other team in the NBA has a Net Rating higher than 7.8.

2. Los Angeles Lakers
Record: 32-7
No LeBron James? No Anthony Davis? No Danny Green? No problem. Despite playing without their two best players and another starter, the Lakers beat the Thunder in OKC on Saturday to notch their eighth straight victory. Kyle Kuzma, in his third start of the season, provided plenty of efficient offense, shooting 15-of-24 from the field en route to a season-high 36 points with four triples with seven rebounds. Rajon Rondo was also inserted into the starting lineup and tallied 21 points (10-of-22 FGs), 12 rebounds, and eight assists. Dwight Howard led the bench brigade with 12 points, 14 rebounds, three assists and two blocks. All told, the Lakers got 48 points from their reserves.

3. Utah Jazz
Record: 27-12
Utah overcame a 15-point deficit in the third quarter on Sunday afternoon in Washington to capture their ninth straight victory. Furthermore, they have 14 of their past 15 games and have rocketed all the way up into a tie for second place in the Western Conference.

4. Boston Celtics
Record: 26-11
The Celtics started off last week in extremely disappointing fashion by losing to the undermanned Wizards on Monday. Boston then got blown out at home by the Spurs on Wednesday and lost to a Sixers team, playing without Joel Embiid (finger), on Thursday. Fortunately, the C’s were able to snap their three-game losing skid on Saturday, thanks in large part to Jayson Tatum, who erupted for a career-high 41 points (on 16-of-22 shooting) and six 3-pointers in a beatdown of the Pelicans.

5. Houston Rockets
Record: 26-12
The Rockets have won four of five since New Years’ Eve. Of course, James Harden and Russell Westbrook have played integral roles in their success this season; however, on Saturday, Houston got a boost from an unexpected source. With Clint Capela (right heel contusion) sidelined, Isaiah Hartenstein made his second career start and scored 17 points (8-of-9 FGs), grabbed 15 rebounds, blocked five shots, and tacked on one assist and two steals in 27 minutes in the Rockets victory over the Wolves.

6. Denver Nuggets
Record: 27-12
The Nuggets are an impossible team to figure out. On Saturday, they look completely listless and lose to the Cavs. It was Denver’s sixth loss of the season against a team with 15 or fewer wins, with three of those coming at home. Then, the next night, the Nuggets beat the Clippers by double-digits.

7. LA Clippers
Record: 27-13
Paul George aggravated his hamstring injury at practice last Wednesday and sat out Friday and Sunday’s contests as a result. The Clips lost in Denver on Sunday and are 8-6 this season when George doesn’t play. Fortunately, Kawhi Leonard said over the weekend that he feels like his knee continues to get better. “I feel better,” Leonard said. “Feeling better. I’m able to jump without it grabbing too much. And hopefully I just keep going uphill from here.”

8. Miami Heat
Record: 27-12
Like many a tourist visiting the Big Apple, the Heat had an awful weekend in New York City. On Friday in Brooklyn, they lost to the Nets despite leading by 12 points at halftime. And on Sunday, they allowed the Knicks to score 40 points in the fourth quarter in a loss to New York.

9. Toronto Raptors
Record: 25-14
Although the Raps lost two of the three games they played this week, they did welcome back Pascal Siakam (strained groin) and Normann Powell (left shoulder subluxation) on Sunday. And it sounds like Marc Gasol (left hamstring) will re-join the team shortly.

10. Dallas Mavericks
Record: 24-15
Dallas beat the Sixers on Saturday to finish 3-3 on their six-game homestand, their longest of the season. The Mavs travel to Golden State on Tuesday night to take on the Warriors and play six of their next nine games on the road. Kristaps Porzingis (sore right knee) has missed seven consecutive contests, but coach Rick Carlisle’s said on Saturday it was possible that KP could return during the team’s upcoming road trip: “It’s day-to-day. He’s continued to make improvements.”

Editor’s Note: Drafting is only half the battle. Dominate all season long with our Season Pass! Use our NEW Start/Sit Tool, Trade Analyzer, Weekly Tiers, Rest-of-Season Rankings, Projections and more on your way to a championship! Click here for more!

11. Philadelphia 76ers
Record: 25-15
Joel Embiid (hand) was diagnosed with a torn radial collateral ligament in his left hand on Thursday and had successful surgery on Friday. The Sixers announced that he would be re-evaluated in 1-2 weeks. Philly beat the Celtics on Thursday without their starting center but were blown out by the Mavs on Saturday night.

12. Indiana Pacers
Record: 24-15
The Pacers host the Sixers on Monday night in Indiana. They are currently just a half-game behind Philly in the Eastern Conference standings. If they can knock off the Embiid-less 76ers, the Pacers will move into fifth place in the East.

13. Oklahoma City Thunder
Record: 22-17
Heading into Saturday night, OKC was rolling. They had beaten the Nets in Brooklyn on Tuesday and then spanked the Rockets at home on Thursday night. All told, they had won seven of eight and 11 of their previous 13 games when they welcomed the Lakers to Oklahoma City. However, the Thunder suffered a disappointing letdown when it was announced that LA would be playing without LeBron James (illness) and Anthony Davis (gluteal contusion). OKC allowed the Lakers to jump out to a 73-49 halftime lead, and that was all she wrote.

14. Memphis Grizzlies
Record: 18-22
The Grizzlies beat the Warriors on Sunday to capture their fifth straight victory. In the process, they moved into the eighth seed in the West. They are 12-6 in the 18 games they’ve played since Ja Morant returned from his back injury. The only team with more wins during this stretch are the Bucks and Jazz.

15. Brooklyn Nets
Record: 18-20
The Nets knocked off the Heat on Friday and then got some great news over the weekend when it was announced that Kyrie Irving would return to action after a 26-game absence. He looked fantastic in a beatdown of the Hawks, tallying 21 points, four rebounds, three assists, a steal and a 3-pointer on 10-of-11 shooting. In addition, Kyrie said he plans to play both games of the Nets’ upcoming back-to-back set.

16. San Antonio Spurs
Record: 17-21
DeMar DeRozan has spearheaded plenty of remarkable comebacks in his NBA career. But you know this one felt special. DeRozan scored 25 points for the Spurs as they rallied from an 18-point deficit to beat his former club 105-104 on Sunday in Toronto. Incredibly, it was his 11th straight game with at least 20 points while also shooting above 50% from the floor

17. Orlando Magic
Record: 18-21
The Magic had won four of five before losing to the Suns in Phoenix on Friday. Unfortunately, the schedule does Orlando no favors, as they have to play five more games on the road before finally returning home on Jan. 22.

18. Portland Trail Blazers
Record: 16-24
The Blazers have lost eight of their last ten games, and things don’t get any easier this week. Portland hosts the Hornets on Monday but then embark on a daunting three-game road trip in which they play the Rockets, Mavs and Thunder, all within four days.

19. Phoenix Suns
Record: 16-23
Plenty of pundits questioned the Suns’ decision to sign Kelly Oubre Jr. to a two-year, $30 million contract this past offseason, but Oubre has greatly exceeded expectations during his first full year in Phoenix. Oubre tallied 25 points, a career-high-tying 15 rebounds, three steals, two blocks, two 3-pointers in a win over the Hornets on Sunday, and is averaging 18.5 points, 6.4 boards, 1.5 steals and 1.9 triples on the season.

20. Minnesota Timberwolves
Record: 15-23
Karl-Anthony Towns (knee, illness) missed his 13th straight game on Saturday. Coach Ryan Saunders said that Towns was ill this weekend, in addition to his knee causing pain. After starting the season 4-1, the Wolves are 5-15 in the 20 games they’ve played since the start of December. Fortunately, Towns is “nearing a return” according to Jon Krawczysnki of The Athletic.

21. Sacramento Kings
Record: 15-24
The Kings hope to get Marvin Bagley (left foot soreness) early this week, but Bogdan Bogdanovic (sprained right ankle) has already been ruled out of Monday’s game vs. the Magic, and, over the weekend, an MRI revealed an injury to Richaun Holmes‘ right shoulder joint, which will cost him at least 2-3 weeks.

22. Charlotte Hornets
Record: 15-27
After dropping a game to the Suns on Sunday, the Hornets have now lost four straight and 10 of their last 12 games. And, while sophomore sensation Devonte’ Graham continues to put up points, he hasn’t been efficient. Over Charlotte’s last 15 games, Graham is shooting just 30.2% from the floor.

23. Chicago Bulls
Record: 14-26
The Bulls were dealt a very tough blow last week when they learned Wendell Carter Jr. (ankle) would miss 4-6 weeks with a severe right ankle sprain. Daniel Gafford, who tallied 14 points (7-of-9 FGs) seven rebounds, two assists and one block in Chicago’s win over the Pistons on Saturday, has started at center since WCJ went down. The win over Detroit snapped a six-game losing streak.

24. New Orleans Pelicans
Record: 14-26
New Orleans has played well of late, winning seven of their last ten games. They went 2-2 last week, despite Jrue Holiday (left elbow triceps strain) missing all four contests. Fortunately for the Pels, Lonzo Ball has stepped in and stepped up. Ball has been stuffing the stat sheet all month long, averaging 18.7 points (on 48.1% shooting), 7.1 rebounds, 8.1 dimes, 1.1 steals and 3.1 triples over the Pels last seven contests.

25. Washington Wizards
Record: 13-26
Remarkably, the undermanned Wizards continue to compete and beat good teams. On Monday, they beat the Celtics, after having knocked off the Nuggets two days earlier. On Sunday, they welcomed Bradley Beal back to into the lineup and very nearly snapped Utah’s eight-game winning streak.

26. Detroit Pistons
Record: 14-26
The Andre Drummond trade rumors heated up last week. We first learned that the Pistons were seriously considering moving ‘Dre when ESPN’s Adrian Wojnarowski reported that Detroit was “escalating discussions with several teams about a trade, including serious recent talks with the Atlanta Hawks.” Then, on Friday evening, Shams Charania of The Athletic tweeted that the Knicks had “made an inquiry.” Expect plenty of other teams to be thrown in the mix in the days and weeks leading up to the Feb. 6th trade deadline.

27. Cleveland Cavaliers
Record: 12-27
The Cavs closed out the week with an impressive pair of wins, first beating the Pistons in Detroit and then shocking the Nuggets in Denver. Tristan Thompson was a beast in both contests, totaling a combined 53 points (on 71% shooting), 27 rebounds, five assists and four blocks over the two victories.

28. New York Knicks
Record: 11-29
The Knicks snapped a five-game losing streak with a solid win over Miami on Sunday. Just as importantly, they got a very strong showing from their young core. RJ Barrett and Kevin Knox combined to score 40 points on only 18 FG attempts. Barrett scored 23 on 7-of-10 FGs and 8-of-10 FTs. Knox scored 17 on 6-of-8 FGs

29. Golden State Warriors
Record: 9-32
D’Angelo Russell returned to action on Sunday and promptly scored 34 points (12-of-24 FGs, 5-of-6 FTs) to go along with seven rebounds, five 3-pointers and four assists in 35 minutes. Over his last seven appearances, DAR is averaging 28.7 points, 5.4 dimes and 4.7 triples.

30. Atlanta Hawks
Record: 8-32
The Hawks are riding another losing streak, this one four in a row, and have lost 14 of their last 16 contests. Trae Young (left hamstring) was ruled out for Sunday’s loss against the Nets.