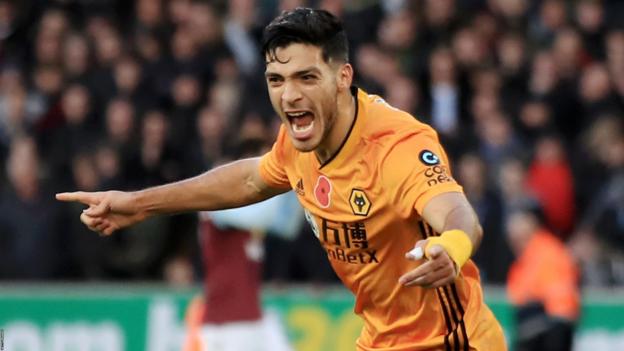 Wolves moved into the top half of the Premier League for the first time since the opening weekend, as they beat a disappointing Aston Villa in the West Midlands derby.

The result sees Nuno Espirito Santo’s side climb from 15th up to eighth, while Villa remain 17th, three points above the bottom three.

Inside a raucous Molineux, the hosts quickly took charge against a Villa team without the injured Jack Grealish and first choice goalkeeper Tom Heaton.

Wolves’ task was aided by an early injury to Villa’s replacement goalkeeper Jed Steer, though they were unable to capitalise until just before half-time.

Adama Traore went close to adding a second for the hosts, seeing his rasping drive cannon against the Villa crossbar, while Raul Jimenez and Diogo Jota also missed good opportunities for Wolves.

Brazilian forward Wesley curled Villa’s best chance over, before Jimenez’s added a second for the hosts, with a sweeping right-foot shot.

It ensured Wolves confirmed their first top-flight win over Villa since 1978, despite Trezeguet’s late consolation effort.