Women’s World Cup: Why France 2019 will go down as Megan Rapinoe’s tournament

Women’s World Cup: Why France 2019 will go down as Megan Rapinoe’s tournament 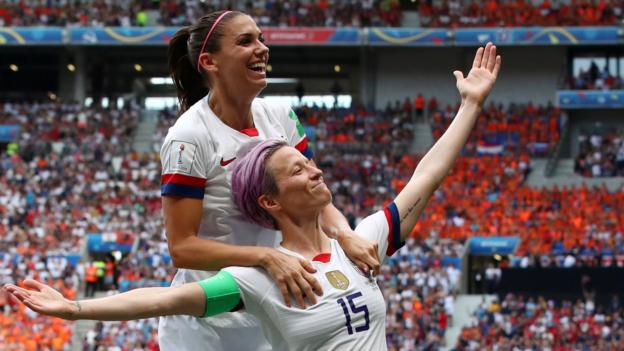 The chorus of defiant chanting from fans at the sold-out Stade de Lyon confirmed everyone’s suspicions: this was Megan Rapinoe’s World Cup.

The USA co-captain took home the trophy for the second tournament in a row. She scored the opener in the final, won the Golden Boot, the Golden Ball and was the official Fifa player of the match in Lyon.

Beyond the pitch, she’s defied the world’s most powerful leader, told football’s governing body they lack respect for the women’s game and voiced her LGBTQ+ allegiance with two simple words during Pride month: “Go gays!”

Film stars are considering dying their hair purple as a tribute; her showman-like open-arm celebration became a meme.

“Megan was built for these moments,” said victorious coach Jill Ellis after the USA’s 2-0 win over the Netherlands in Sunday’s final.

“The bigger the spotlight, the bigger she shines.”

At 34, Rapinoe is far from a new face or name in women’s football.

She has played for seven different clubs across three continents, winning the NWSL Shield with Reign FC on two occasions, as well as the French top division with Lyon. For her country, she is an Olympic gold medallist and now two-time World Cup winner.

If you look back at her showreel, she has always been an entertainer. At the 2011 World Cup, when the Americans finished as runners-up to Japan, she scored against Colombia and celebrated by grabbing a stadium microphone and singing Bruce Springsteen’s “Born in the USA”.

But with the women’s game more visible and more popular than ever before, it feels as if Rapinoe – and what she stands for – is now centre stage.

During the group stages, when the USA came through with three wins from three games, she was filmed saying she would not go to the White House – or words to that effect – if she was invited by President Trump. Cue a Twitter response from the US leader, which included the line: “Megan should win first, before she talks.”

She was then shown on television screens worldwide staying silent during the national anthem, a move she has made in support of American football quarterback Colin Kaepernick.

The interest in the forward swelled, just in time for her to score the opener in the USA’s quarter-final win over hosts France.

The Californian held court in the build-up to Sunday’s final, with journalists hanging on to her every word as she questioned Fifa’s unequal approach to prize money in the women’s and men’s game.

“I feel invincible,” she said after lifting the trophy. “We’ve put on the most incredible show that anyone could have asked for. We can’t be better ambassadors. A little public shame never hurt anyone, right?”

Alex Morgan has long been established as the commercial face of the national team, with extra-curricular activities including modelling, acting and writing.

Morgan’s five goals in the USA’s 13-0 win over Thailand, plus another against England which prompted the famous tea-sipping celebration, put her in line to be top scorer before Rapinoe stepped up and equalled her tally against the Netherlands – taking the Golden Boot because she had scored six in fewer minutes.

Washington Spirit midfielder Rose Lavelle was also impressive throughout, scoring three goals – including the second in Sunday’s final – and earning the Bronze Ball trophy for the tournament’s third-best player.

But there was still only one name on everyone’s lips.

“Megan’s a player who uses her platform and her voice in the right way and that’s needed – she stands up for things,” said BBC pundit and former England defender Alex Scott.

“I’m not sure how long she’ll be around for but if she does stop she’ll be going out on top,” added goalkeeper Hope Solo, her former US team-mate.

True to form, Rapinoe made a dramatic entrance as she came to talk to the media after the USA’s victory parade.

She bounded in late, following a regulation doping test, and interrupted coach Ellis in mid-flow.

“I’ve got a party to get to, y’all,” she quipped, before assuming her position in front of the microphone.

“I think everyone is ready for this conversation to move to the next level,” she said when asked about the “equal pay” chanting at the final whistle, which was prompted by the arrival on the pitch of Fifa president Gianni Infantino.

“I think we are done with the questions like ‘are we worth it?’, ‘should we have equal pay?’ Everyone’s done with that. Let’s get to the next point of ‘what’s next?’ How do we support women around the world? How can Fifa do that?”

While her country’s leader tweeted again, this time to offer his congratulations to the team, coach Ellis summed up Rapinoe’s influence on women’s football – and the global stage – in one sentence.

“For some people the spotlight can burn – but for Megan, it highlights who she is.”

BBC Sport has launched #ChangeTheGame this summer to showcase female athletes in a way they never have been before. Through more live women’s sport available to watch across the BBC this summer, complemented by our journalism, we are aiming to turn up the volume on women’s sport and alter perceptions. Find out more here.