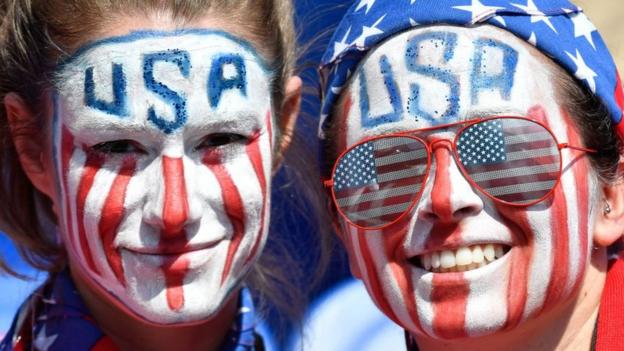 Twenty-four teams brought skill, character and passion to the Women’s World Cup. Only one arrived with the most important ingredients of all: an iron will to win and an unwavering self-belief.

After the United states beat the Netherlands in Lyon on Sunday to retain the trophy, it was natural to wonder if anyone can topple the game’s dominant force in the coming years.

Their foundations for success are vast: Fifa estimates there are 13.36m girls and women playing football around the globe, with a staggering 9.5m of those coming from the US.

With that level of national enthusiasm for the sport, coupled with a committed travelling fanbase and an extremely talented squad, the US look a relentless winning machine. When will anyone be able to stop them?

Many tried, in what has been the most competitive Women’s World Cup yet. But no-one could stop the side who began their campaign with a 13-0 win over Thailand.

Not improving Spain, who gave the holders a scare in the last 16 but were eventually beaten by two Megan Rapinoe penalties amid scorching temperatures in Reims.

Not hosts France, pipped in an intense quarter-final in Paris, with an on-top-of-the-world Rapinoe spreading her wings wide in celebration.

Nor England, who saw Steph Houghton’s weakly-struck penalty saved by Alyssa Naeher in the 84th minute of a dramatic semi-final.

Those three consecutive 2-1 wins saw the world champions thoroughly tested, scrutinised and even criticised, but each time they found a way to win.

And so it was again in the final, in front of a capacity crowd at the Stade de Lyon, as they showed how to emerge victorious from a tricky game.

Former Arsenal goalkeeper Sari van Veenendaal made a quartet of fine saves, but the Americans eventually broke through, even if it was thanks to a touch of help from the video assistant referee in awarding a penalty, which Rapinoe scored.

“We leaned on our experience this entire tournament,” said 34-year-old Rapinoe.

“For us older players especially to carry a lot of that load and set an example for the younger players is absolutely a huge reason why we’ve been so successful.”

But if any onlookers think this experienced USA squad is coming towards the end of an era after reaching three straight World Cup finals, think again.

Because as the second-half pressure grew, up popped their breakthrough star of the tournament, midfielder Rose Lavelle, with a sublime second goal to settle the final and highlight the potential of this nation’s next generation of winners.

At 24, Lavelle is 10 years younger than Rapinoe but has dazzled at times in midfield for the Stars and Stripes.

Performances like hers have perhaps been overlooked by the world’s media, as the holders made news for everything from pretending to sip tea to rejecting a hypothetical invitation to the White House.

But the world’s number-one side will now remain the team to beat for at least another tournament cycle.

“You have to applaud the USA,” former England right-back Alex Scott told BBC One. “They are a step above everyone else.

“The USA do not apologise for wanting to be the best and they have that winning mentality that everyone else needs to get.

“They show up on the biggest occasions. It is up to the rest of Europe to close the gap.”

In many experts’ eyes, European teams are doing just that, with seven of them reaching the quarter-finals. This is at a time when major European clubs and nations have been investing heavily in women’s football.

And one of the USA’s 2015 gold-medal winners feels things might be different in four years’ time.

“I think the US could go backwards if we don’t start investing in our domestic game,” former goalkeeper Hope Solo told the BBC.

“That’s how you develop players and train players and we’re cutting corners in the US because we’ve put everything into this World Cup and into the national team.

“I’m so excited for four years from now, because we are going to see the Dutch team and the English team improve on their play and it’s going to be a fascinating tournament.”

Many people thought the USA might be caught this time around, the eighth and most-watched edition of the tournament. But Ellis’ camp always seemed to have an unwavering belief that they would lift the trophy.

Some of their actions – perhaps unfairly – were considered arrogant, from star winger Rapinoe publicly rejecting President Donald Trump, to star striker Alex Morgan celebrating a goal against England by pretending to drink a cup of tea.

The players weren’t the only confident ones: before the final, a group of a dozen US journalists unanimously predicted a win for Ellis’s team. There was not a pessimist among them.

But that confidence shown by their players, fans and journalists has proved fully justified.

Twenty years on from the moment the nation fell in love with “soccer” – when Brandi Chastain ripped her shirt off after scoring the winning penalty in the 1999 final in front of more than 90,000 fans on home soil – The United States are hungry for more success.

You wouldn’t bet against them achieving it.

BBC Sport has launched #ChangeTheGame this summer to showcase female athletes in a way they never have been before. Through more live women’s sport available to watch across the BBC this summer, complemented by our journalism, we are aiming to turn up the volume on women’s sport and alter perceptions. Find out more here.