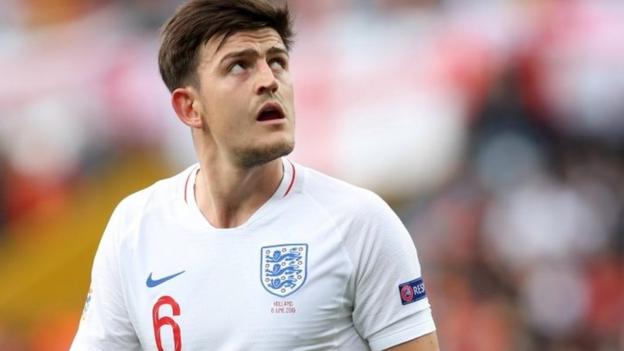 Manchester United have made a £70m bid for Leicester defender Harry Maguire.

United boss Ole Gunnar Solskjaer is keen to sign an experienced central defender and Maguire also has the leadership qualities he is looking for.

It is understood that Leicester’s board have been made aware of Maguire’s wishes and that the 26-year-old would welcome the chance to step up to what he regards as a higher level.

However, £70m would also be short of Leicester’s valuation of the player.

The England defender, who has also attracted interest from Premier League champions Manchester City, signed a five-year contract last September and manager Brendan Rodgers made it clear at the end of the season he feels Maguire can develop even more if he remains at the club.

Maguire, who is currently on holiday, has been concerned at the prospect of Leicester pricing him out of a move away from the King Power Stadium.

United have already signed youngsters Daniel James and Aaron Wan-Bissaka from Swansea and Crystal Palace respectively. The addition of Maguire would take their summer spending to almost £140m.

United have had a long-standing interest in Maguire but they backed away from a deal 12 months ago because they felt the £70m that would be needed for a transfer to be concluded was too high.

Leicester would be loathe to lose one of their key men ahead of a campaign that, with no European football to distract them, offers genuine hopes of marking Rodgers’ first full season as manager with a top-six finish.