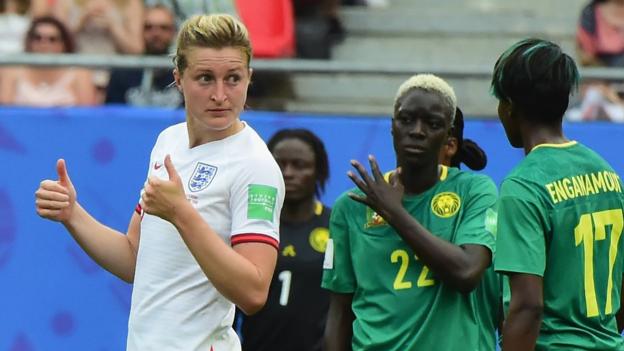 It was one of more remarkable England games of any World Cup finals but, on an already hot and humid evening in Valenciennes, the Lionesses somehow kept their heads cooler than everyone around them to reach the quarter-finals.

Cooler, most certainly, than Cameroon’s incensed players, who were so enraged by two VAR decisions that went in England’s favour that they twice came close to walking off the pitch in protest.

Cooler than Chinese referee Yan Fang, who seemed to have lost full control of an unruly game that was made much harder to officiate by one team petulantly refusing to accept her decisions and staging impromptu meetings on the pitch.

Cooler than the bewildered English reporters in the confused press box, most of whom were baffled by the extraordinary scenes unfolding in front of them, or the reporters who were there to cover Cameroon’s second World Cup – one of whom was shouting loudly about VAR and the apparent injustices of the frenzied situation below.

And cooler than even many of the fans, with booing, whistling and disapproval ringing through the muggy air at the Stade du Hainaut as each review by the video assistants seemed to take longer to resolve than the last.

In truth, the last-16 tie was a heated contest from start to finish, beginning with Yvonne Leuko’s rough elbow on England winger Nikita Parris and ending with Alexandra Takounda’s nasty challenge on Steph Houghton, which the Lionesses will hope does not make their skipper doubtful for their last-eight tie on Thursday.

But it was either side of half-time that we saw something rarely witnessed before in a high-profile, team sport event being televised all around the world.

As Ellen White and England celebrated her fourth goal of the tournament and the Lionesses’ second of the game, the Cameroon players appeared to contemplate a strike, such was their refusal to accept the video assistant referee’s rulings, and there were tears in many of their eyes by half-time.

So strong were Cameroon’s feelings regarding a perceived bias against their side – who are 43 places below England in the world rankings – that they gathered for a team talk rather than taking the kick-off and remonstrated with officials in front of millions watching on.

England boss Phil Neville said afterwards he was “ashamed” by their opponents’ behaviour, while Cameroon boss Alain Djeumfa spoke of a “miscarriage of justice”, refereeing mistakes and his team’s “fair play”.

The latter’s comments came in one of the most bizarre post-match press conferences you could ever see, with most English members of the media more than surprised by Djeumfa’s stance, as he thanked God for making him able “to remain calm” and refrain from withdrawing his players from the field of play.

Media covering the match spoke of being appalled by what they felt was one of the worst examples of sportsmanship they had seen, with the Cameroon squad having shown a scarcely believable lack of respect for the referee’s authority.

However, once the dust settles and the sticky, summer air in north-east France clears, the fact remains that the biggest aspect to emerge from the match is England are in the last eight of the World Cup.

Just as Houghton – who scored in the last 16 for the second World Cup in a row – said afterwards, England “remained calm, professional and got the job done”.

Admittedly, there were moments where their defensive concentration wobbled amid Cameroon’s best spell, not least when Ajara Nchout capitalised on a poor clearance and hesitant marking to briefly make the score 2-1, or when Alexandra Engolo was twice presented with fine opportunities to find the net moments later.

But overall, Neville’s side kept it together and ultimately secured the Lionesses’ biggest win in a World Cup knockout match, and their second-largest winning margin in any game at the finals.

And once the analysis of Cameroon’s behaviour concludes, focus will switch to the fact the result moved England just 90 minutes away from a third consecutive semi-final in a major tournament.

After the drama in Valenciennes, it is easy to forget England remain unbeaten from their four games in France and now it is the world’s 12th-ranked side, Norway, stand between them and the last four.

Thursday’s Scandinavian opponents will pose their own distinctive challenge in Le Havre.

Norway came through a dramatic last-16 tie of their own, progressing on penalties against Australia on Saturday in a match that also courted VAR controversy.

The 1995 world champions are ranked nine places below England and it the Lionesses won 2-1 in the last 16 of the 2015 World Cup in Canada.

However, the Norwegians should not be underestimated. Their only defeat came against hosts France – once again in controversial circumstances – and they showed their speed, spirit and attacking prowess against Australia.

From the threat of new Barcelona signing Caroline Graham Hansen’s intelligence up front, to the marshalling of Chelsea duo Maria Thorisdottir and Maren Mjelde at the back, Martin Sjogren’s side have the quality to cause any side problems.

However, after sealing victory over Cameroon with Alex Greenwood’s sweeping finish from Toni Duggan’s well-planned corner, this England team seem ready to deal with even scenarios nobody could have envisaged.