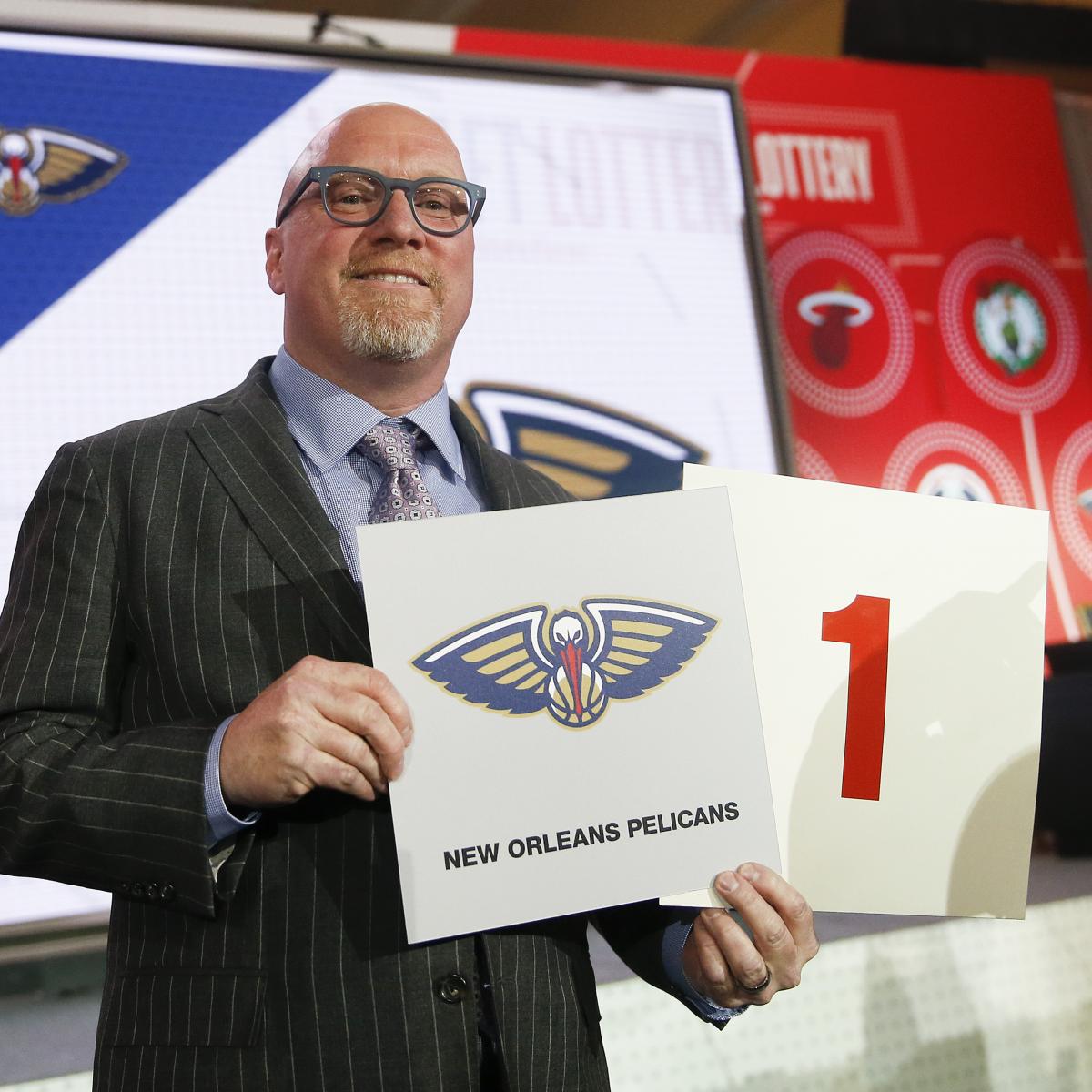 From the Big Easy to Beantown, the basketball world is buzzing with trade chatter after Tuesday’s draft lottery.

The New Orleans Pelicans scored the night’s biggest win by climbing up to No. 1 and presumably bringing Zion Williamson to town. But they still have a certain single-browed superstar’s future to deal with, and the latest rumors don’t sound promising on that front.

We’ll examine that situation and more trade talk below.

While the Pelicans were celebrating their lottery jackpot NSFW-style, Anthony Davis found a way to rain on their parade.

Zion or no Zion, Davis’ stance on wanting out of New Orleans “has not changed,” league sources told Shams Charania of The Athletic and Stadium.

Davis’ trade request surfaced in late January. “It’s my time,” Davis told reporters of his decision. “I feel like I gave this city all I could.”

The Pelicans opted against dealing him before this past season’s trade deadline, leading to an awkward setup for the stretch run. He suited up just 15 times after the request, averaging only 22 minutes in those contests. He seemed overanxious for a fresh start while wearing a “That’s all folks!” shirt to the season finale.

But New Orleans has proved it won’t be impatient with this process. In fact, executive vice president of basketball operations David Griffin continues to express confidence on potentially changing Davis’ mind.

“We can be Oklahoma City with Paul George,” Griffin told ESPN’s Zach Lowe. “We can hold onto [Davis] and let him see what we really are. [Winning the lottery] changes how quickly he can buy into it. It gets us closer. Every day, maybe he believes a little more.”

Griffin’s optimism aside, it’s hard to see this situation resulting in anything other than a Davis deal. He not only wants out, he holds a fair amount of leverage with the ability to enter free agency next summer.

New Orleans can (and should) seek the world in return for the six-time All-Star. Where that puts him is anyone’s guess. It doesn’t sound promising for the Los Angeles Lakers, although climbing to No. 4 at the lottery should’ve helped their chances. Davis might be open to a future with the New York Knicks, provided they can form the right trade package.

Much with this situation remains fluid. Davis’ desire for a scenery change, however, apparently does not.

With Williamson presumably New Orleans-bound and therefore removed from the Davis trade talks, Boston Celtics swingman Jayson Tatum might reclaim his designation as the trump card in these sweepstakes.

While his sophomore season perhaps fell below expectations, he’s still a 21-year-old with a scoring arsenal advanced beyond his years. His role has already shifted several times with the Shamrocks, and he still owns a career per-36-minute scoring average of 17.3 points and an impressive 46.1/40.0/84.0 shooting slash.

It’s unclear if the Celtics would deal Tatum for Davis, but it has been discussed “extensively.” For what it’s worth, Tatum admitted he’d trade himself for a player of Davis’ ilk.

Should Boston reach the same conclusion and win the Davis sweepstakes, the potential payoff might be two-fold. The C’s would not only land Davis, they might give six-time All-Star Kyrie Irving a reason to re-sign.

“[Celtics president Danny] Ainge, according to sources, wants to re-sign Irving and believes he will do just that if the Celtics acquire Davis,” Frank Isola reported for The Athletic.

Taking these talks a step further, Irving locking into a long-term pact with Boston could convince Davis to do the same. As promising as Tatum looks, the chance to assemble the Association’s next superteam might be too tempting for the Celtics to resist.