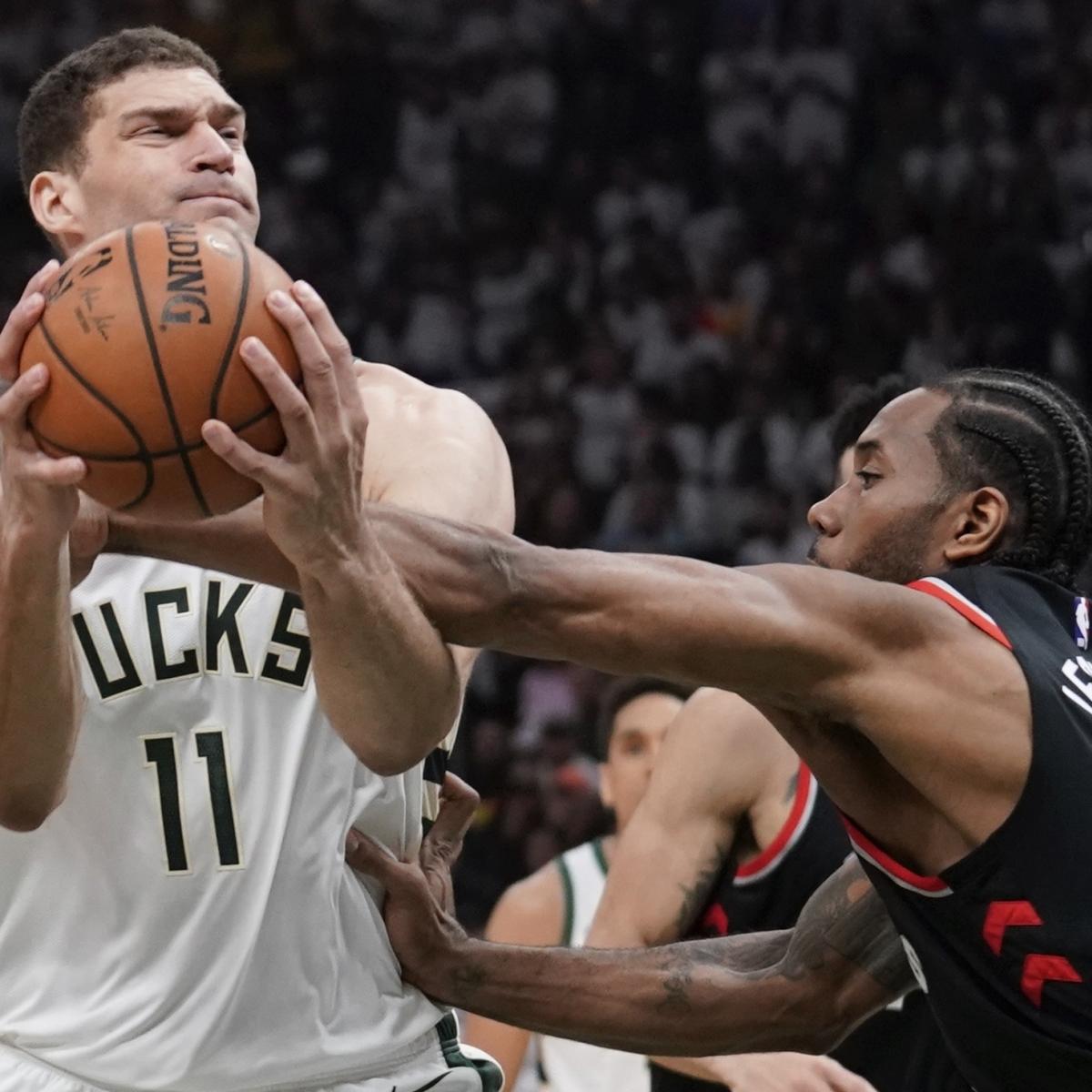 Brook Lopez took charge for the Bucks in the fourth quarter of their series-opening win over the Raptors.Morry Gash/Associated Press

The Milwaukee Bucks did not play their best game in the Eastern Conference Final opener against the Toronto Raptors, but that did not stop them from taking a 1-0 series lead.

No, it was not superstar Giannis Antetokounmpo who led the way to a dramatic fourth-quarter comeback. Instead, it was Brook Lopez who drove the Bucks to the 108-100 win. Lopez scored a playoff career-high 29 points to lead the team, and that included 13 points in the decisive fourth quarter. Antetokounmpo scored 24 points, and added 14 rebounds, six assists and three blocked shots.

The Bucks outscored the Raptors by 15 points in the final quarter, and closed the game on 10-0 run.

“Fourth quarter killed us, 32-17,” Lowry said, per the Associated Press (h/t ESPN.com). “They outplayed us in that fourth quarter. They got a little bit more aggressive. They made some big shots, made some big plays. It sucks when you lose like that. But we had our chance and we’ve got to learn from it.”

The Bucks had the best record in the NBA during the regular season and homecourt advantage in this series and in the NBA Finals if they advance that far. If the Raptors are going to win the series, they will have to get at least one road win in Games 2, 5 or 7.

The series continues Friday night in Milwaukee at 8:30 p.m. ET, and the game will be televised by ESPN.com.

The Golden State Warriors will try to stretch their lead to 2-0 over the Portland Trail Blazers Thursday night at Oracle Arena in Oakland.

This series is a battle of two of the best guard tandems in the league. Splash brothers Stephen Curry and Klay Thompson combined for 62 points in the series opener, with Curry leading the way with 36 points and nine successful three-point shots.

Portland’s Damian Lillard and C.J. McCollum were not at their best in the series opener. Those two combined for 36 points on 11 of 31 shooting, and could not keep up with their Golden State counterparts. Perhaps they had not recovered from their seven-game triumph over the Denver Nuggets, but that can’t happen in Game 2 if the Trail Blazers are going to be competitive on the road in this series.

The Blazers were sloppy throughout and turned the ball over 21 times in the series opener.

The Warriors will once again be without superstar forward Kevin Durant. He left Game 5 of the Warriors’ second-round series against the Houston Rockets with a calf injury, and he has not played since.

The Durant injury is giving Golden State head coach Steve Kerr a chance to lean on his bench more than he did in the regular season. Kevin Looney scored 14 points in a reserve role in Game 1, while Shaun Livingston added 11 points to help the Warriors secure the victory.

“This series feels like it’s a series where we can play more people,” Kerr said after Game 1, per Dave Del Grande of Field Level Media (h/t ESPN.com). “It’s a different matchup, and I think that what you saw (Tuesday) is what we’d like to get to every night if we can, in terms of playing 10, 11 guys.”

It’s clear that the Trail Blazers must come up with a better effort in Game 2, and that means more production from Lillard and McCollum, fewer turnovers and finding a way to keep the Golden State bench from making meaningful plays.