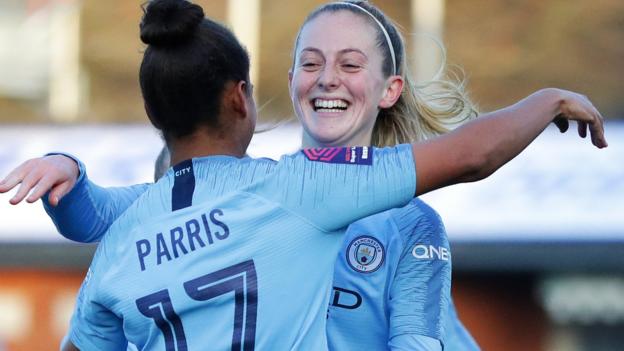 Manchester City are placing more focus on targeting the Women’s FA Cup because the league title race is out of their hands, says midfielder Keira Walsh.

City are second in the Women’s Super League, a point behind leaders Arsenal, but the Gunners have a game in hand.

Walsh’s side host cup holders Chelsea in the semi-finals on Sunday (15:30 BST), as the two sides meet in the last four for the fourth time in five years.

Both ties will be broadcast live on the BBC, as the teams battle for places in the final at Wembley on 4 May.

Asked whether City – who won the League Cup in February – were thinking about a possible treble, Walsh told BBC Radio Manchester: “It’s not something we’re focusing on.

“The league is in Arsenal’s hands now. We have to wait for Arsenal to slip up and they’re a top team so we’re not holding out for that.

“We’re concentrating on what we can do. The FA Cup is the one we’re all going to focus on at the minute. This is the trophy that we’ve spoken about trying to bring back to Manchester.

“We’ve been at Wembley before and it’s such a special occasion, so that’s the one that the girls are really rooting for.”

Royals ‘have already made history’ by reaching semi-final

In Sunday’s first semi-final, last-four debutants Reading face a West Ham side who are in their first season as a professional club.

Royals captain Kirsty Pearce told BBC South Today: “There’s no pressure on us to get to the final. We’ve already made history by getting to the semi-finals.

“It’s going to be a special moment if we get there but we first have to concentrate on the game on Sunday.”

Royals boss Kelly Chambers added to BBC Radio Berkshire: “It’s a dream of mine to get to a cup final.

“If I didn’t want that pressure on my shoulders then I wouldn’t be in this job. I’ve never felt a lot of pressure. It’s something that I tend to thrive on.

“Yes, I’m going in to my first FA Cup semi-final, so there’s a little bit of nerves, but for me it’s excitement. It’s an exciting day for us and the club.”

Chambers hopes her side can inspire youngsters on Sunday, adding: “Back when I was younger, I didn’t have female role models when I was growing up, looking to get into the game.

“For little girls to now have female role models to look up to is fantastic. It shows where the game is going.

“The more youngsters we can get involved in the game, the game’s going to go even further.”