That Peter Crouch Podcast back for a second series

That Peter Crouch Podcast back for a second series 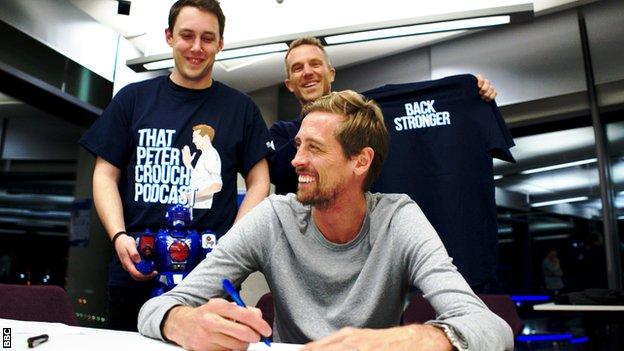 I’ll be honest, I don’t really know what a press release is, which is awkward because the BBC have asked me to write one to announce series two of That Peter Crouch Podcast.

Then again, six months ago I had no idea what a podcast was, and look where we are now.

Right. So after months of negotiations, high-level meetings and not getting round to it, me and my friends Tom Fordyce and Chris Stark are back.

I’d normally use a hashtag like #BackStronger and leave it there, but I’ve been told that’s not enough for a press release, which makes you wonder why I’ve been lumbered with doing it rather than the person who knows it all, but still.

Details: we start again on 20 March, when two beautiful new episodes will be available to download from BBC Sounds and whichever other podcast apps you use.

Then we’ll do a load more over the next few months, mainly because recording a podcast like mine involves sitting around in a pub talking nonsense about football.

It seems other people also like the idea of pub-based football nonsense-chat, because apparently series one has had almost four million downloads.

Is that genuinely impressive or just a small number of obsessives listening to it lots of times? I don’t know, but it’s the biggest one that BBC Sport has ever done, which has both surprised them and meant they’ve had no choice but to give us the green light to go back to the pub many more times.

If you missed series one, there are 12 episodes out there for you to catch up on, plus a ludicrous end-of-season special in the Samrat restaurant, Ealing.

The aim is to show what it’s really like to be a professional footballer: who decides who sits where on the team bus, which Premier League club has the poshest shower gel in its changing rooms and why paying £800 for a bad jumper is considered moral behaviour.

That’s the starting point. We often end up elsewhere because of the emails and tweets that come in from listeners, like:

If I’m honest, it’s spiralling out of control. Because of series one we’ve got a football team in Vietnam using a T-shirt with my face on it as their team kit.

We’ve got a thousand pod ambassadors across the world with official certificates and badges, helping to spread the word. We’ve got James McAvoy badgering me in hotel lobbies about the specifics of particular episodes.

This series? We’re going to talk volleys and overhead kicks. Boots. Footballers’ houses. We’ll do a show on dreams you have had that featured footballers, or me in particular, so start sending those in when you can (peter.crouch@bbc.co.uk).

I can’t honestly tell you much more about it, because we haven’t planned it properly. We’re just going to start and see what happens. Subscribe. Download. #passthepod. Whatever.

Just don’t ask me to write any more press releases. This one’s nearly broken me.