Cardiff will be ‘honourable’ with Nantes on Sala transfer

Cardiff will be ‘honourable’ with Nantes on Sala transfer 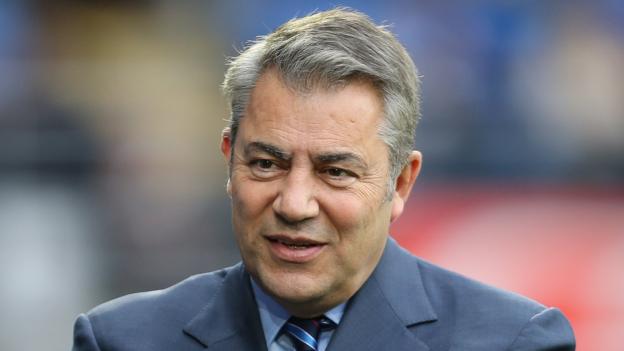 Chairman Mehmet Dalman says Cardiff will be “honourable” with Nantes over the £15m transfer for Emiliano Sala and has defended withholding a payment.

Dalman confirmed the French club are threatening legal action, but they are seeking “clarification” on the issue.

Sala’s body was recovered from the wreckage of a crashed plane last week.

Dalman also issued strong backing to Neil Warnock over his connection with football agents, believing people have had “knives out” for Cardiff’s manager.

Sala had been travelling to Cardiff in a light aircraft piloted by David Ibbotson that went missing over the English Channel on 21 January.

A fundraising appeal to fund an underwater search for the pilot has been set up.

Cardiff City owner Vincent Tan has boosted funds by donating £50,000 of his own money towards the appeal.

Confirming the Nantes action, Dalman said: “Of course, if we are contractually obliged to pay them then of course we will. We are an honourable club.

“But if we are not – and there are some anomalies in that – then surely you would expect me as the chairman and guardian of this club’s interests to look into that and hold our position. That is what we are doing.

“We are still in the process of gathering information and that process will be ongoing. And when we reach a level where we have enough information, I am sure we will sit down with Nantes and move forward.”

Dalman says Cardiff are looking to get a full picture of events.

“They [Nantes] have asked for what they believe is the money due to them and there is a process and they have initiated that process,” he added.

“What we are saying is, that we are not in agreement with that process given the extraordinary events that have taken place and the tragic circumstances. We are not making any positive or negative statements.

“We are simply saying, please understand there are a lot of questions which need to be answered and that is what we are trying to do.”

‘Knives out’ for Warnock

Warnock has complained about a “vendetta” against him, amid criticism of his connection with agent Willie McKay, but Dalman says he has no case to answer.

Football agent McKay says he arranged the flight that Sala took from Nantes, but was not involved in selecting the plane or pilot.

Asked about Warnock’s relationships with agents he said: “I have absolutely no worries about that. We take our relationships from the day he started working at Cardiff. I don’t really want to get involved in any vendettas and mud throwing, it’s nonsense.

“We have seen people taking knives out against Neil and that is just nonsense. I want to air my frustration with that behaviour and give my full support to what the team is doing.

“The best way to get even is by being successful. I am not going to pay attention to rumours and bad press. We just have to stay focussed and do what we should be doing. That is to win football matches.”

Dalman denied close relations to McKay, although two of McKay’s sons had been in the Cardiff Academy.

He says it is unfair that there has been unfair scrutiny of Warnock and the club are supportive of him.

“I feel the need to raise this,” Dalman said. “I brought Neil into this club and I think he has done a tremendous job for us in more ways than one. It is important that he understands we are there for him.

“He was there for us in a difficult period and got us promoted. He has brought some great players into the club and I want him to know we are a family. The fans, the board, the chairman, the CEO and the owner are fully behind him as he strives to achieve the status of staying in the Premier League.”

Dalman also dismissed talk of Warnock stepping down from his post, amid the emotion of the death of Sala, after Warnock said he considered his future “24 hours a day, seven days a week.”

“That discussion has never taken place and I have absolutely no intention of holding that discussion,” he said.