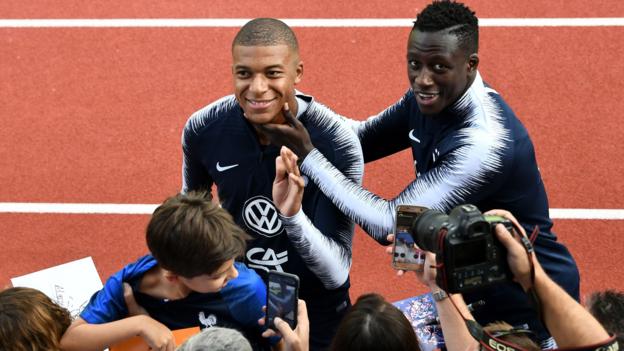 The best XI in the world was named this week at the Fifa Best Awards – as voted by Fifpro, the world players’ union.

Find out who made the XI.

The BBC Euro Leagues Football Show team had a go at picking who they think will feature in next year’s team – and there was no place for Cristiano Ronaldo.

BBC Radio 5 live’s Steve Crossman said: “Atletico Madrid will win either the Champions League or La Liga, maybe both. And Oblak is the best keeper in the world. I would put Diego Godin in there. He’s a sensational centre-back.”

Italian writer James Horncastle said: “Joao Cancelo wasn’t even in Portugal’s World Cup squad, but he’s come on leaps and bounds in his six months in Italy. He was on loan at Inter last season and now he’s at Juventus. Massimiliano Allegri says he can become the best full-back in the world.

“Giorgio Chiellini should have been in this one – he is now the captain at Juventus and is leading – he’s picked up where Gianluigi Buffon left off. Juventus will go far this season.”

“With Maurizio Sarri, N’Golo Kante is going to keep improving like he did under Claudio Ranieri and Antonio Conte. Sarri is the perfect manager for him

“Lazio won’t win a big trophy but Sergej Milinkovic-Savic has got everything.”

Spanish football writer Guillen Balague said: “If Kylian Mbappe is allowed to perform at his best and not have to go through the filter of Neymar, he’ll be in the team. He has everything to be the best centre-forward in the world.

“Perhaps he won’t get there just yet – at the end of the season we’ll be saying ‘wow, he’s been consistent’, which is what we demand of young players.”